The new study by the Crime Prevention Research Center was originally published here.

U.S.A. –-(Ammoland.com)- The CPRC has just issued our newest annual report on the number of concealed handgun permits in the US. A copy of the report is available for download here. Some updated numbers are shown at the bottom of this post. Past reports can be viewed here. The executive summary is shown here:

Among the findings of our report: 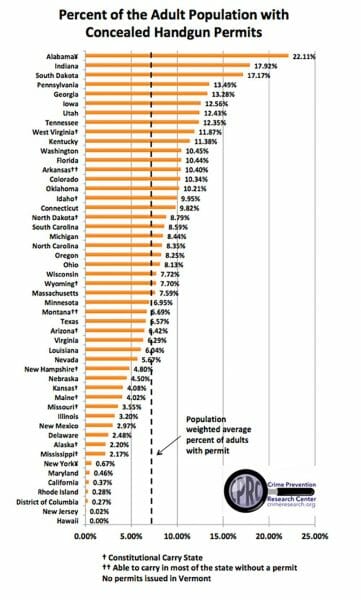 The report is available to be downloaded here.

The Crime Prevention Research Center (CPRC) is a research and education organization dedicated to conducting academic quality research on the relationship between laws regulating the ownership or use of guns, crime, and public safety; educating the public on the results of such research; and supporting other organizations, projects, and initiatives that are organized and operated for similar purposes. Visit: www.crimepreventionresearchcenter.org

@Darren, don’t think for a minute that the mightiest,can never fall… Ebar hear the story of, David and Goliath? Speaking of which, they didn’t have a problem taking down, Jesus Christ.

More Democratic voters are fighting against the Anti-Gun propaganda ATTACKS on our second amendment RIGHTS! Also, more women are empowering themselves by taking personal control of their own safety and security. Now is the time we DEMAND more Democratic Politicians to stand up and SUPPORT our 2nd. Amendment right and stop these gun-grabbing laws!

Thank you for your service and congratulations on your retirement, hermano. Please do not forget to employ operational security in you new life. You are, now, protecting your own assets and finances. Subject to your questions, that concludes my Safety Briefing.

See what happens with a good laugh, even your kids will get called the wrong name.

I Like The Way Our Political Class, Tell Us That We Don’t Need, Our Guns, But They Need Theirs, Because Of Who They Are. The Truth Is, We (All Of Us) Have To Give Up Our Equalizers, Because They Can’t Trust Us!!! Don’t You Find It Strange, That At Any Of There Meetings, Or TV Interviews, Not One Single Reformed Crook Is On Stage With Them. Telling You, That If You Gave Up Your Guns, Like These Lying Politician’s Say, That Every Crooks In America, Would Be More Afraid Of You???

Myself as well as my wife. BOTH CARRY License issue concealed carry permits I will not leave my house without it nor will my wife we are not going to be the next one you see on any news being slaughtered like sheep Every good American should exercise their Second Amendment rights to protect them selves and their families and the Democrats don’t like it they can kiss my ass it’s the constitution they should learn to read it

Mark, our new Republican Governor in 2016 signed into law here FOR CONSTITUTIONAL CARRY, wr still have CCW’S mostly for folks traveling out of state.
and i never go any place without mine and when home always have oe withing reach.
so luck to you are your wife.

Thank you James. Hope nether of us will ever have to use them. God bless. Be safe

“concealed handgun permit data is the only really “hard data” that we have on gun ownership across the United States. Still, an even larger number of people carry because in 14 states people don’t need a permit to carry in all or virtually all those states” While these numbers in the article are good, for values of good, the statements are totally misleading. At best these are educated guesses on nuber of people who actually daily carry. 1. Concealed permits have nothing to do with gun ownership. They don’t take into account long guns of any type. 2. You can… Read more »

You DID actually READ the TITLE of THIS article, didn’t you?

If you do not have protection for yourself and your family you, possibly, put yourself in the middle of a crisis with no way to get out of it. I live in a nice area, on a dead end road, but I have no idea who may be casing the area and might decide to come and take what I have. They will get more than they bargained for. The local sheriff dept. is only about 10 minutes away, or so.

While I’m glad more people are carrying I’m concerned that licenses to carry are a form of gun registration. They’re registering the gun owners rather than the guns directly. These licenses need to be abolished so we can freely exercise the right to bear arms.

EVERY American Citizen has THE RIGHT TO KEEP AND BEAR ARMS, thereby, regardless of they have,a permit or not, their LIVING AND BEING is giving the government their tally. Each and every CITIZEN.

I carry myself. It is a comfort to know you have protection and your legal in having it. Women especially need to get a permit. It could prevent some of these abductions you see on the news today.

The number of “permits” in Md. is SOOOooo small due to the Md St Police and the DemocRATic communist muslem party have what they call a “may issue policy”. However, in fact Md has what in reality is called a “may NOT issue policy”. About the only way you can get a “permit” is if you know a POLITICIAN or own a business that only works about 5 hours a day, 5 days a week.

A. White
Reply to  Laddyboy

The in state RINOs are dangerously worthless backstabbing a$$holes and completely useless. Can you hear me Hogan & friends?!

REMOVE them from office.

That is awesome the cops can’t always be there to protect you. Pretty sure the Socialist Democrats don’t like that but I don’t care.

More people with Concealed Carry Permits than soldiers in all standing armies in the world put together. I believe that far outnumbers the “antis” in the good ol’ USA.

That is why this country will never be invaded.

Those days ended with the atom bomb.

@Larry B, To take over, control, and subdue a region, country or area one needs boots on the ground. Mere bombing will not do it. The Chinese have a military academy like our West Point. For years, their officer candidates have been writing white papers about taking over North America. The logic is China has a huge population and a worn out land mass. The North Americans have a small population and are not using their resources, so why not take North America? The Canadians are insufficient for a meaningful defense. The Mexicans are incompetent, at best. The American military… Read more »

No, WB, I believe you are wrong. If somebody invaded we’d use the bomb. They’d retaliate, etc. China, Russia, etc, know the truth about numbers of gun owners here.
The US military is far from small. Yes, China has way more troops but our strength in people and materiel, especially field tech is tremendous. Nobody is coming. The real threat of big violence is internal from our own gov’t getting too big for it’s britches. Pretty soon we’ll all be speaking Spanish anyway.

@LB, Nope, we would not use nuclear weapons because we have something better. If another nation uses nuclear weapons on the US, then we, in the country, will be safe. You metrosocialists will be steam.
The US military is tiny. China has 200 times more troops. Tech is an advantage that does not go to numbers.
Your last two sentences stray from the issue between you and Holt.

IDK why you guys are posting about the US being invaded. The issue in the real world is the US projection of power. We’ve become the mightiest empire in the history of the world. The US is the first to achieve actual world domination. No one has anywhere near the power to kick us out of Eurasia or Africa much less invade us.

@Darren, Of course you are right, Darling. Now, go back to sleep, bad old world dominating America will be destroyed soon.