U.S.A. –-(Ammoland.com)- In 2015, SureFire changed the game for concealed carriers who wanted a weapon mounted light with the introduction of the pint-sized XC1. Since then companies like Olight, Inforce, and now Streamlight have continued to push compact weapon lights to the next level. At SHOT 2018 Streamlight introduced what could be considered the king of compact weapon lights, the Streamlight TLR-7.

While the TLR-7’s 500-lumen output is impressive, the light also puts out a claimed 4,300 candela to provide some reach. Why is 4,300 candela impressive when the gold standard SureFire X300 Ultra (1,000-lumen model) puts out over twice as much candela? Simply put, when you compare the output to other lights in the “concealable” compact weapon light segment, nothing touches the TLR-7.

Here are some numbers to consider:

The numbers tell an interesting story, don’t they? Sure, there are some lights like the Olight PL-Mini 2 that have a greater LUMEN output but they fall flat on their face when you start looking at candela numbers.

If you don’t understand candela, I highly recommend watching Mrgunsngear’s video on the topic.

Controls, Features, & A Look Inside

One of the most interesting things about the TLR-7 is the interchangeable rail key inserts that allow one model of TLR-7 to fit just about any pistol with a rail. Streamlight includes six plastic inserts that relocate where the light interfaces with the rail slots on your pistol. The TLR-7 ships in the “universal 1” insert making it compatible with Glock Gen 1-4 pistols, Beretta APX, Ruger SR-9, and Springfield XD & XD (M) pistols.

Now that we have established that the Surefire TLR-7 is the current king of the compact weapon lights, the controls are a sticking point for many. The flush buttons found on either side of the light aren’t as easy to use as just about every other compact weapon light that I listed earlier with the exception of the older SureFire XC1 A. Even after almost a year of use, I still feel as though the switches on the light are in need of improvement. That said, they are still useable.

The cool thing about the TLR-7? Making some improvements to the switches should be a cakewalk given the design of light. Since there was an issue with the first light that Streamlight sent to me for review, I decided to take it apart and see how the TLR-7 is constructed. The photos below should make it pretty apparent that the light is designed to be economical while still being robust enough for every day carry.

We already talked about output earlier, there is no question that the TLR-7 is the most powerful compact weapon light on the market currently. The light ships from the factory with the included strobe mode disabled, which is my preference anyhow. If the strobe mode is your thing, the light can be reconfigured using Streamlight’s Ten-Tap system. Once you have the strobe mode enabled getting the light into the strobe mode is pretty easy, just double-tap one of the ambidextrous activation switches and the TLR-7 turns whatever room you are illuminating into a party.

Now, if you are one of those that have put their pistol into a range bag only to find that it had been switched on inadvertently you will be pleased to learn about the “safe” position that prevents inadvertent operation. Preventing your batteries from getting kilt in your range bag is reasonably simple, just loosen the front cap about a quarter turn and you will feel a detent that renders the light inoperable.

I mentioned earlier that I had more than one TLR-7, the first of them there was a bit of an issue with and that is why I took it apart. The light would flicker during dry fire every time the firing pin dropped. Now Streamlight has addressed the problem and it is no longer an issue, but it should be noted that it was an issue for the first few months the light was on the market. Instead of repairing my test sample, Streamlight elected to send out a second light which gave me the chance to take one apart without ruining good gear.

It appears that they stiffened the spring on the inside of the front cap to prevent the battery from losing contact with the contact pad inside the light body. There may have been other changes to the internals, but nothing that I was able to spot without taking apart a working light. 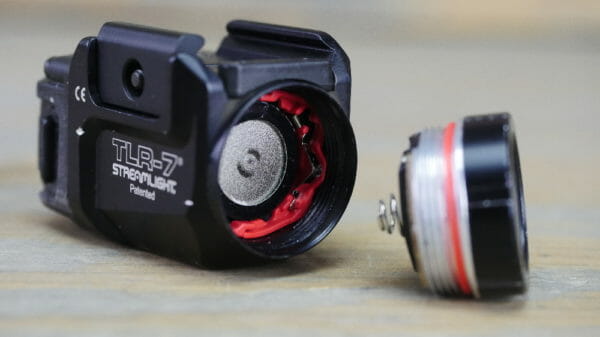 This is where the compact design of Streamlight’s TLR-7 really stands out from other similar output lights. Companies like Henry Holsters, PHLster, Raven Concealment, ANR Design, and a blue million other holster manufacturers have great holster options that fit many popular model pistols with the TLR-7 fitted. After a year on the market, the Streamlight TLR-7 has received great support from smaller Kydex benders as well as large manufacturers making the light that much more viable.

While the benefits of a smaller light aren’t going to be as apparent when carrying strong side, it’s when you start stuffing a pistol in the appendix position the light becomes a concealed carrier’s best friend. About 90% of the time I carried a pistol with the TLR-7 fitted it rode in a PHLster Spotlight, but that changed when the FN 509 Midsize was launched and Henry Holsters released a TLR-7 compatible FN 509 holster that accepts Discrete Carry Concepts clips.

One of the biggest hurdles for those looking to try appendix carry has been maintaining a level of comfort while sitting. While I can’t tell you what you might experience, I found that a properly set up holster with a Glock 19 and TLR-7 was very comfortable even on long drives.

After a ton of time using and carrying the TLR-7, I feel absolutely comfortable recommending the light to those looking for something smaller than a Surefire X300 Ultra for EDC. Since the fix implemented by Streamlight, the TLR-7 has been 100% reliable and has exceeded every expectation that I had for the pint-sized light. In fact, I liked the light so much I have purchased several more for other pistols that make it into my carry rotation. While the Streamlight TLR-7 is the best compact weapon light that money can buy right now, there is always room for improvement.

The first thing that I would love to see addressed is the switches. Streamlight could easily improve the switches to be friendly to those with smaller hands thanks to the modular design of the light. If Streamlight was able to replicate the same style paddle switches found on the popular Inforce APL series of lights, it would quell a lot of the complaints I hear about the TLR-7.

Now my other request of Streamlight would require a small redesign, making it less likely than seeing revamped switches. I would LOVE to see the body of the light enlarged ever so slightly to accept rechargeable 18350 batteries that would potentially allow them to increase the output of the light in both lumens and candela. There are some pretty crazy 18350 powered handheld lights on the market, some that rival duty size weapon lights, by switching power sources it may be possible to pack some serious power into a compact light body.

Right now the TLR-7 is the best choice by a large margin for those looking for a compact weapon light that doesn’t add any length to a Glock 19 sized gun. That may change later this year with the introduction of the new SureFire XR1, we will have to see what kind of candela it is pushing when the production model is released.

Some of the links on this page are affiliate links, meaning at no additional cost to you, Ammoland will earn a commission if you click through and make a purchase.
6 Comments
Most Voted
Newest Oldest
Inline Feedbacks
View all comments

I’m having a hard time getting my tlr-7 to stay on my g19. Is there a torque requirement?

I understand why you feel that way but Surefire still makes some of the best weapon lights on the planet. When I am selecting components for a defensive firearm $10,356 in donations to Democrats and $16,610 in donations to Republicans don’t sway my choices.

Tactical for a sccy cpx 2?

Sadly that pistol has no rail. If you desire a light or other accessory you are going to need to buy a different gun.