USA – -(AmmoLand.com)- “He who passively accepts evil is as much involved in it as he who helps to perpetrate it.” — Martin Luther King, Jr.

A lot of things happen in the world, some great, some good, and some bad. And some so bad that no matter how many “very’s” you put in front of it, it still falls short in describing it.

In those instances, only the word “evil” suffices.

EVIL COMES IN MANY FORMS

Whether you admit it or not, only the word “evil” can capture the moral gravity behind ethnic cleansing, serial killers, and torture.

Actions such as government officials abusing their power or a mob of people committing an attack are evil. Evil includes sins of commission (doing these acts) and sins of omission (failing to stop these acts).

But what of evil that goes beyond your personal circumstances? As discussed, evil at the macro level doesn’t merely include serial killers and genocidal dictators but also acts or omissions by other levels of government or society.

EVIL IS THE OPPOSITION TO GOD

GOD gave Man the Ten Commandments, which outline the beliefs, thoughts, and actions that honor and dishonor GOD. Actions such as stealing, murder, and lying are in opposition to His laws, are unjust uses of force against others and therefore, evil.

Because Man has fallen and is prone to evil, it is safe to say wherever you find mankind, you will find evil. Man, however, does not always commit evil alone. They act as part of institutions, and one institution capable of evil is government.

There is absolutely a place for government in civilized society, and we will never argue otherwise. But when federal, state, and local governments overstep into areas protected by the Constitution, which codifies our natural rights as given to us by God, it becomes our moral duty to resist those actions. [because of the pandemic hysteria we are in that place now were the government is oversteping]

Government, however, isn’t the only institution that employs the unjust use of force; society does as well. When mobs lash out and commit violence against others, this is also a form of evil. When companies in the marketplace purposely defraud or injure people, that is evil.

RESIST EVIL WHEREVER YOU FIND IT

Identifying evil is only the first step, as acknowledging an issue without taking corrective action changes nothing. So how do you resist evil when you come across it?

Like the nose on your face, evil is always there, even if you don’t think about it very often. The extreme examples of evil are what usually capture our attention, but we must be ever vigilant that the many forms of evil always surround us. Fighting evil is not easy, otherwise, everyone would do it.

But it is our moral obligation to resist evil wherever we may find it.

To do otherwise is, itself, evil.

“Silence in the face of evil is itself evil: God will not hold us guiltless. Not to speak is to speak. Not to act is to act.” — Dietrich Bonhoeffer, German evangelical pastor, theologian, anti-Nazi dissident

To help you resist evil we are having a sale on our AR Concealment Carrier by AR500 Armor®! 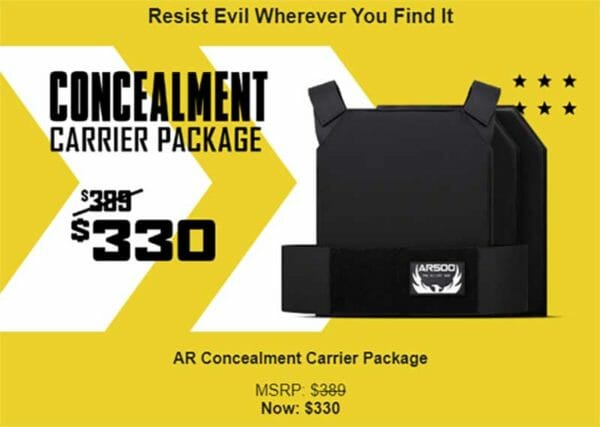 Concealment Body Armor like nothing else. The revision of our concealment carrier is based around a single goal, maximum concealment. Down to material selection and form of each component, the AR Concealment Carrier is designed to minimize printing.

We did away with traditional Cordura Nylon and went with a moisture-wicking, breathable, 4-way stretch abrasion-resistant fabric for each plate pocket. This switch thins the profile, improves comfort against the skin, and helps the carrier mold to the lines of your body improving concealment. The plate pockets are a keep it simple design, with a slight overlap passthrough on the lower 1/3 section of each plate pocket on the body-facing side. This design allows you to easily insert your armor and does not require the use of plate pocket flaps and retention straps to secure the armor; reducing the overall thickness of the plate carrier by not requiring layers of material to layer up over one another. This approach reduces the front side cummerbund print you see on traditional concealment type carriers

The shoulder straps are constructed from ultra-thin but strong Hypalon and are lined with low profile Velcro only where needed, while still allowing full adjustability. The combination of low-profile Velcro and Hypalon allowed us to create a shoulder strap design that minimized material overlap, again reducing thickness of the AR Concealment Carrier for improved concealment. 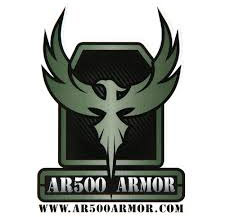 AR500 Armor® launched its own line of ballistic armor and body armor solutions in 2012. We entered the industry with the mindset of manufacturing top quality, reliable products that offered our customers high-value solutions. Our products are intended for responsible law-abiding American citizens, our law-enforcement personnel, and our military personnel; we currently sell to legal residents of the United States.

With our unique in-house manufacturing processes and ability to acquire material made to our specifications, we’ve set the standard for ballistic steel core body armor. Utilizing industry-leading spall and fragmentation mitigation coatings we’ve further increased what’s possible with ballistic steel. Our products are available through our website and authorized dealers throughout the United States. AR500 Armor® is a privately held business; Our Headquarters, team members, and manufacturing facility are located in Phoenix, Arizona.

I love my AR500Armor Testudo kit, but these guys suffer from a FOUR MONTH lead time. It’s been like this for more than 9 months by my reckoning, and though they say they have opened up another shift and hired more people, they haven’t shrunk that lead time by a single day. I go to RTS Tactical and buy a complete set of plates & carrier from them and I get it all within just 2-3 weeks. AR500ARMOR, I love y’all, but YOU NEED TO HIRE MORE PEOPLE! (AND… I’m amazed at how many Americans are armoring up! This is… Read more »