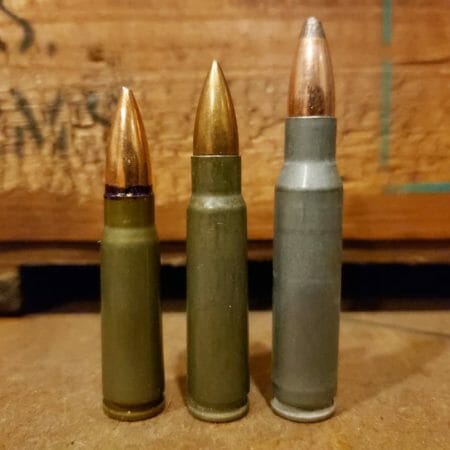 Tampa, Florida – -(Ammoland.com)- A federal jury has found Victor Ricardo Grant (39, Brandon) guilty of possession of ammunition by a convicted felon. Grant faces a minimum mandatory sentence of 15 years, and up to, life in federal prison. His sentencing hearing is scheduled for March 4, 2022.

Grant was initially indicted on February 4, 2020, and a superseding indictment was filed on September 28, 2021.

According to testimony presented at trial, federal agents, along with Florida local law enforcement agencies, investigated a series of credit union robberies and carjackings committed in Hillsborough County and Pinellas County in 2019. As part of the investigation, the FBI obtained a search warrant for Grant’s residence in Brandon, Florida. The Hillsborough County Sheriff’s Office and federal investigators searched Grant’s home on January 22, 2020, and found approximately 400 rounds of 7.62 caliber ammunition inside backpacks in Grant’s bedroom closet and in the attic. All of the ammunition in the backpack in the attic was loaded in magazine clips for an AK-47 assault rifle; that backpack also contained ammunition drum magazines for that type of rifle. Because of his several prior felony offense convictions, federal law prohibits Grant from possessing ammunition.

This case is being prosecuted as part of the joint federal, state, and local Project Safe Neighborhoods (PSN) Program, the centerpiece of the Department of Justice’s violent crime reduction efforts. PSN is an evidence-based program proven to be effective at reducing violent crime. Through PSN, a broad spectrum of stakeholders work together to identify the most pressing violent crime problems in the community and develop comprehensive solutions to address them. As part of this strategy, PSN focuses enforcement efforts on the most violent offenders and partners with locally based prevention and reentry programs for lasting reductions in crime.

And F their partners too: NSSF, and locals who help ATF enforce their “laws” & “regs”.

Last edited 1 year ago by Russn8r
0

What kind of honest, gun rights supporting, freedom loving patriot can be against your statement here? Apparently, several morons think it’s okay to support the BATF and their traitorous supporters/partners. Lie down with dogs, get up with fleas.

Last edited 1 year ago by JPM
2

No, they are not against the good stuff that he writes. They down vote him because he has insulted so many people and uses filthy language.
Vehemently disagree with him sometime, just as an experiment, and see what he alleges about you.

it is sad that so many supposed adults can behave like three years old , im sure he has blasted something I have said ,its on him if he cant say it constructively. and says more about the author than whom they attack so when they get it right I vote up

Is that being an enabler. Like when someone covers for an addict? Just saying.

no, it is more about vote down stupid vote up intelligent thought, with hopes they will grow; but no bets
and now I know who one of the adolescents is

Last edited 1 year ago by swmft
0

Well, if defending churlish people is your thing, you will soon be surrounded by them.

WB trolls folks with a bunch of sock puppets & says “they” [instantly] vote us down because we’re “churlish”.

Yet Hunter is still walking around.

“A well regulated militia, being necessary to a free state, the right of the people to keep and bear arms shall not be infringed.” The second amendment. The atfe is a criminal, unconstitutional government terrorist organization that disavows their oath to the people, the nation and the constitution, in particular the second amendment. The atfe should be disbanded, arrested, tried and jailed for their crimes which include treason, tyranny, terrorism, theft, intimidation, assault and battery, falsifying government documents, attempted murder and murder. The second amendment gives every free American citizen the right and obligation to keep and bear arms no… Read more »

He got a life sentence that Penn state law and the judge never intended.

read it again…state law and conviction, not federal. even then, where is the felony conviction? he plead guilty to a class one MISDEMEANOR.
did his class one misdemeanor carry a possible sentence longer than 12 months? if not, he is not prohibited federally.

Last edited 1 year ago by Tionico
6

The tyrants advocating for, enacting, and enforcing arms laws are often the least knowledgeable about arms. I think at this point people are literally voting for the dumbest among us to control our lives. The movie Idiocracy turned out to be more of a documentary or accurate prediction of the future than a comedy.

It would be of far more interest if these BATF puff pieces were to include details about the “disabling” charges and convictioins for people like this. Did he get behind on his child support payments, was he caught driving 21 miles per hour above a ridiculously low posted speed limit? Did he sell a firearm to a life-long friend without trudging off tho the gun store to”do it right”? If he participated n an amred roobery of a convenience store, well then yes, he SHOULD be debarred theuse of arms but ONY until his “debt to society” is fully paid,… Read more »

The ammo was “was loaded in magazine clips.”

Please, please, please tell me this is not the actual language the ATF used in its press release. Your introductory paragraph suggests that’s the case, in which case we are really screwed.

There needs to be a law that says if you cannot use the correct nomenclature of firearms and their parts, you can’t prosecute. That and abolish the BATF!!

I detest the BATF and everything they stand for, but in this case, they are technically correct. The clips are used to load the magazines, so, “magazine clips” is what pretty much what they are, but we refer to them as “stripper clips”.

I believe the piece you’re referring to is called a spoon, which it kind of resembles. I bought a bunch of stripper clips for my AR magazines and the seller threw in a couple of those. Maglula makes a speed loader that accepts stripper clips.

But….. butt… was he also charged and convicted of any credit union robberies or carjackings?
curious minds would like to know.

AK rifles do NOT use CLIPS!! This trial HAS TO BE thrown out due to the INAPPROPRIATE use of nomenclature. Oh! By the way normal Publicly sellable rifles are NOT Automatic and thus are NOT “assault rifles”! FYI; The only ASSAULTER that EXISTES is a LIVING BREATHING HUMAN who is WANTON to harm others!

Actually AKs and SKSs do use clips to load the magazines (stripper clips). I have a couple hundred clips for AK, AR, SKS and FN FAL magazines.

Last edited 1 year ago by JPM
4

Exactly which offense did he commit that made him a felon?
Had it been say being dumb enough to be caught smoking a joint in public he would be a felon but far from a dangerous one! Still he would be excluded from possessing a firearm or ammunition under existing Florida law. But…..this would be a rather uncalled for exclusion.

That portion of the law needs to be revamped to differentiate between potentially violent felons and those who are clearly innocuous.

there are a lot of people, who have done no harm to anyone else that are felons for stupidity of law.,and connected people that seldom get caught for doing harm to others . look how long ny governor cuomo got away with shit till video proof of wrong doing

Last edited 1 year ago by swmft
1

Pretty sure this is a magazine

He had several felonies, a few years, but not 15 to life, would do him and society good.

Shocking that Bob would work with the BATFE:

To be fair, so LEOs, state, federal and local are good guys. But far to many ATF & FBI have a god or King complex. But armed robbery whether knife, club or firearm is a threat of attempted murder. . The Commandment is not Thou shall not kill. THOU SHALL NOT MURDER is correct. Felony charges/convictions of tax law, fotgery, doe$nd threaten anyone’s live and should not ban firearms possession. But that is favorite tactic of ATF if they can. Violent criminals threaten death and the victims should be able to respond with lethal force. Not vigilantism hunting for suspects… Read more »

“To be fair, so LEOs, state, federal and local are good guys. But far to many ATF & FBI have a god or King complex.”

Ask Patricia Konie (and so many others).

“To be fair, so LEOs, state, federal and local are good guys.”