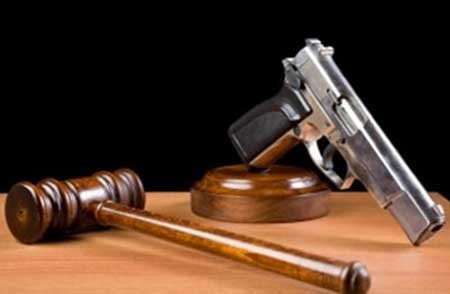 Fort Myers, FL – -(Ammoland.com)- A federal jury has found Raynaldo Ray Quiroga (37, LaBelle) guilty of Hobbs Act robbery, brandishing a firearm during a crime of violence, possessing stolen firearms, and possessing a firearm as a convicted felon, related to an armed robbery of a pawnshop in LaBelle in May 2021. As a result, Quiroga faces a maximum penalty of life in federal prison. His sentencing hearing is scheduled for March 21, 2022.

According to evidence presented at trial, Quiroga, a seven-time convicted felon, entered Capital Pawn in LaBelle on the morning of May 19, 2021, falsely impersonating a law enforcement officer by wearing a green sheriff’s deputy uniform, a black tactical vest, a badge, and a duty belt equipped with a firearm. While in the shop, Quiroga brandished his firearm and zip-tied the store’s two employees before stealing six guns and fleeing the scene. Law enforcement agents quickly identified Quiroga as a suspect and later found multiple pieces of evidence at his residence and in his car connecting him to the robbery.

This case was investigated by the United States Bureau of Alcohol, Tobacco, Firearms and Explosives, the Hendry County Sheriff’s Office, and the Federal Bureau of Investigation. It is being prosecuted by Assistant United States Attorneys Jesus M. Casas and Simon Eth.

This case is being prosecuted as part of the joint federal, state, and local Project Safe Neighborhoods (PSN) Program, the centerpiece of the Department of Justice’s violent crime reduction efforts. PSN is an evidence-based program proven to be effective at reducing violent crime. Through PSN, a broad spectrum of stakeholders work together to identify the most pressing violent crime problems in the community and develop comprehensive solutions to address them. As part of this strategy, PSN focuses enforcement efforts on the most violent offenders and partners with locally-based prevention and reentry programs for lasting reductions in crime.

I can understand Sheriff and FBI involvement but see no reason for the tax collectors to have gotten their fat butts out of their office chairs.

What the hell ever happened to three strikes and your in prison for life?

Problem is the Prison Industrial Complex pushed 3 Strikes for nonviolent victimless “felonies” to line pockets. The corrupt Cali prison guard union spent $millions passing it (vastly biggest donor), said it only applied to “really bad” felonies. A victims’ rights volunteer, I heard that BIG lie directly from the head of the union, believed it, didn’t look into it. After passing 3-1, folks were getting life for stealing a slice of pizza, drug possession etc. They became for-profit prison labor slaves. Should’ve been only for violent mens rea. Voters amended it in 2012. Not sure if the slaves got out.

Last edited 4 months ago by Russn8r
-6

Not applicable in Florida, never has been.
Florida has (had) a tougher law, the ’10-20-Life’ that was passed in 1998 which mandated minimum/mandatory sentences, but it was watered down in 2016 giving sentencing discretion back to Judges.

It was found to be to cruel. It needed to be three strikes and death. That would have resolved the problem but for some reason more people than not are either afraid or just feel the death penalty is too inhumane and others are concerned about the innocent being convicted. I agree with the last statement but if DNA can be part of the proof, I say burn them. OreGONE, where our governor caters to BLM and Antifa and calls Trump supporter’s terrorists, anarchists, white supremacist and racists while who she supports burns, destroys, loots and kills and the ANTI-… Read more »

awaiting approval
A real truthful answer to your question. IMO

Last edited 4 months ago by musicman44mag
0

is ammoland editing and removing comments?

it does seem to have had posts vanish .so i guess if statement is too political poof

SEVEN Time Convicted Felon, WTF happened to Three Strikes your Out. It’s time that Whoever let him Out Needs to Join Him as he serves his Sentence. Enough Said.

The judges that let him out repeatedly should be sharing his cell and serving his sentence with him. Make judges responsible financially and criminally for the crimes of repeat offenders that they repeatedly release.

AND………F atf and their extended families

You are right of course but until we do something to make the politicians feel the heat at home, nothing will change, they will continue once elected to support the party and fuck their constituents.

All parasites deriving a taxpayer funded paycheck should be held to criminal and civil standards for the results of their actions……….working to destroy the constitution is levying war against the citizens of the US, it’s TREASON and it is past time for the hangings (or firing squads) to commence

a 37 year old lout with seven priors on his record was NOT held to “sentencing guidlines” in any jurisdictioin I’ve ever heard of. Any records or files on this guys long list of felonies? What were the max sentences allowed, and minimums. and what was actully levied each time agasint this guy.

So are DA’s but that does not stop them from not prosecuting criminals. IE; the new DA in NY.

Not necessarily. Judges can still get around them if they really want to.

think I have this figured out, letting all the criminals go is a distraction so we dont see what criminal stuff atf fbi and other governmental agencies are doing

The Feds rarely do the heavy lifting.

Aww, c’mon, they do the most important things. Who else is going to take over all the free space at the local cop shop, order everyone around while sharing as little info as possible and take all the credit?

The article fail to explain that the Hobbs Act, at 18 U.S.C § 1951, is a federal statute prohibiting extortion or robbery by wrongful use of force or fear, or the attempt of these crimes, affecting interstate or foreign commerce. This 1946 Act was originally designed to target racketeering in labor disputes.

so HOW did this case “affect interstate commerce”? He sole a gun that had been shipped interstate from manufacturer to the pawnshop? That’s bogus add on. Did they charge him wiht impersonating an officer of the law? WHEN will FedGov be butted OUT of the firearms industry? This is no more a federal crime than stealing a car. They ALL travel, or could travel, or did travel, or might travel at some point before they hit the knacking yards, interstate. Yet when was the lst time any car theft was prosecuted by the Feds? Smoke nd mirror,s charades.. kid games… Read more »

He can invoke the ‘victim of the system’ defense and once again walk free.

The felon is stupid. The locals catch him. BATFE takes the credit. I could just throw up.

atf people should be in jail with him

or a job where actual WORK PRODUCT is produced. BATF are NOT in that category.

Seven felonies and out walking around. The justice system has some holes in it.

bleeding heart liberals , and waaaayyy to many of them are judges three time looser laws work put them on work farms earn their food

Put them in the ground after 3 felonies, save the food.

Chinese use them as slave labor they dont produce they starve

SO.. get divorced, are unempolyed, and have no money to pay your child support. Felony #1. Drive at a speed 21 miles per hour over the magic number on the black and white signs at the side of the road. Felony #2. Get behind on your federal income taxes above a certain rather smallish amount, felony #3. You STILL want folks dead for “felonies”? Limit such penalties to those who have taken innicoent life. THAT is the biblican command. But DO execute those found guilty of taking inncent life. ALL of them. This is not don,e and so lesser crimes… Read more »

Many “felonies” are nonviolent victimless “crimes” that were legal 100+yrs ago. “Felony” = whatever a legislature says.

Hey! That is a terrific idea! A judge screws up three times and that judge goes to the work farm!

So you think that would not get abused. These socialist marxist so called democrats would find a way to abuse such a law! Even with phony charges if need be!

Remember, “It’s not a justice system, it’s just a system.”

There seems to be more and more tyrants here judging by all the downvotes. It’s amazing how much infringement people will not only take but cheer for as long as it’s “their tyrants” doing the infringing.