U.S.A. –-(AmmoLand.com)--On Friday, April 29, 2022, the Lambton branch of the Ontario Provincial Police seized a drone that had become stuck in the branches of a tree in the Canadian neighborhood. The payload of the drone was eleven handguns.

On Friday morning, Lambton OPP, with the help of the St. Clair Township Fire Department, used a bucket truck to retrieve a large drone from a tree located on the bank of the St. Clair River attached was a bag containing 11 handguns.

The tree was on a property belonging to Christine and Jeremy Ackwood.

“Our neighbour had spotted someone in our yard in the middle of the night and he had a remote control,” Christine explained. “He wasn’t sure what was going on.”

That’s when things got very interesting. The stranger in the yard was spooked by Ackwood’s neighbour, and that’s when the stranger lost control of the drone and it crashed into the large trees in the Ackwood’s backyard.

Link to video from torontocvtvnews

The one handgun displayed by the police appears to be a sub-compact Glock with the serial numbers removed. It is one of tens (perhaps hundreds) of millions of guns in the United States which are unregistered and untraceable.

Millions of guns are not registered by design, to prevent the establishment of a national gun registry in the United States.

Port Lambton is on the St. Clair river, which is the boundary between Canada and the United States, 20 miles northeast of Detroit. The river, at this point, is less than half a mile wide. 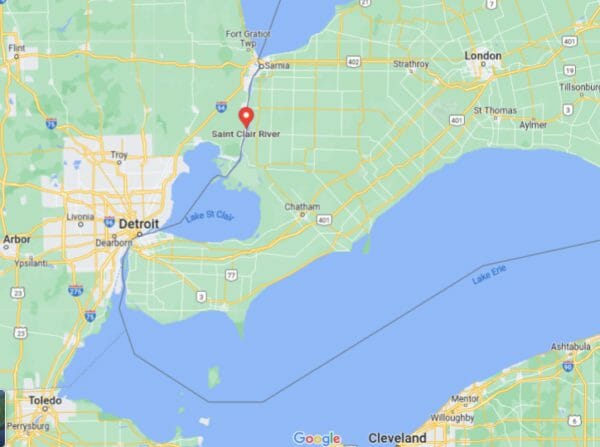 The Saint Claire River is about 2000 feet wide at Port Lambdon. Image from Google maps.

Similar drones are available for under a thousand dollars. Prices range up to $20,000 for high-end drones which can carry the same 10 kilograms (22 lbs).

A drone flight could deliver 11 pistols in less than half an hour. There is a significant potential for black market profit.

As with drug numbers, these are undoubtedly inflated based on what the retail buyer pays. They do not take into account the considerable risk and overhead in smuggling. Canada has a long tradition of being law-abiding. The market for black market handguns is not large.

However, Canada has a growing crime, gang, and immigrant problem. Most of the black market guns go to criminal gangs. At even $1,000 a gun profit, eleven guns are plenty to pay for the drone or a few drones. Most of the risk is on the retail end of the distribution. With digital trackers and GPS, retrieval of smuggled items has little risk. This operation appears to be by low-level novices.

Drones are the latest way of evading the border. Anyone with a kayak and some moxie could do the same thing, for much less money. A close friend with decades of experience policing the southern border listed several low-tech methods which work well. The most ingenious and cheapest, involves a water balloon launching slingshot.  One of those can throw a handgun a hundred yards or more.

The major reason for increasing crime in Canada is the law-abiding culture in Canada is being degraded by trust destroying government policies and the importation of non-Canadian cultural values.

Dean Weingarten has been a peace officer, a military officer, was on the University of Wisconsin Pistol Team for four years, and was first certified to teach firearms safety in 1973. He taught the Arizona concealed carry course for fifteen years until the goal of Constitutional Carry was attained. He has degrees in meteorology and mining engineering and retired from the Department of Defense after a 30-year career in Army Research, Development, Testing, and Evaluation.

It is one of tens (perhaps hundreds) of millions of guns in the United States which are unregistered and untraceable. Yes and that is as it shuold be here. there IS no general requirement to “register” handguns in most states. The few that are required to be “registered are only registered with that state’s obnoxious government, and often not very effectively. Guns can lawfully come and go between that state and others with no record, the registry is not “complete” and I do not beleive it is searchable bu gun serial numbers. Only to know what that owner in that… Read more »

Last edited 1 month ago by Bill
3

There are large swaths of the US-Canada border which are unguarded. Our neighbor to the north doesn’t worry, for example, about illegal migrants, since all Canadian citizens must be identifiable by national ID cards. Anyone entering illegally or overstaying tourist entry would stand out when accessing hotels, hospitals, legal services, etc. Guns can just as easily enter Canada across the border from US, but agents ALWAYS query entrants if they have weapons.

“Millions of guns are not registered by design, to prevent the establishment of a national gun registry in the United States.” This is an out-right-LIE! Handguns in the USA ALL have numbers which can identify the ORIGINAL buyer! Removing the NUMBER from ANY GUN IS ILLEGAL! CRIMINALS REMOVE GUN NUMBERS!! Honest People DO NOT REMOVE NUMBERS from guns!!OH YES! Governmental REGISTRATION IS ILLEGAL — even when the government calls this REGISTRATION a “list” or “data”! IT IS STILL ILLEGAL!!!

“Handguns in the USA ALL have numbers which can identify the ORIGINAL buyer!” Well, that statement isn’t exactly true either. While it is true that all firearms made or imported into the USA since passage of the 1968 Gun Control Act are required to have a serial number, those made or imported prior to the effective date of GCA68 often do not. While that serial number combined with access to sales records MAY in some cases allow the original purchaser to be identified, in many cases those records no longer exist. My Erfurt P08 Luger, made in 1914, has a… Read more »

and even IF the original retail purchaser can be identified by some illegally kept registry, subsequent sales often take place, and there is no “national database” recording all those, as there generally is with motorcars. I know of plenty of guns that have serial numbers stamped by the factory, but there is no way that number could ever lead to the present possessor, and all above the law. A firearm may lawfully pass through an handful, or even dozens, of different owners throughout its useful life, no record past the original ourchaser having been kept. Make no mistake, there are… Read more »

Progressive and New Left Progressive ideology is the true threat to Canadian national security just as that poison has been a threat to our national security in the US for the past 50 years. Our communist and other totalitarian adversaries worldwide know they cannot defeat us on the battlefield so they support those who try to rot our systems from within.
And it is working. Until-liberty ideologies are gaining a foothold in Western civilization, children are being indoctrinated and not educated and our societies show the damage.

so the gun runners are stupid so many miles of easy crossing they stay near the cities, gang members transferring guns used in us crimes to gang members in canada. ,and canada wants to disarm their legal citizens so they can be victims …typical commie bs

7
AmmolandTV
View All
Editor’s Pick
Recent Comments
wpDiscuz
We use cookies on our website to give you the most relevant experience by remembering your preferences and repeat visits. By clicking “Accept All”, you consent to the use of ALL the cookies. However, you may visit "Cookie Settings" to provide a controlled consent.
Cookie SettingsAccept All
Read More
Manage consent