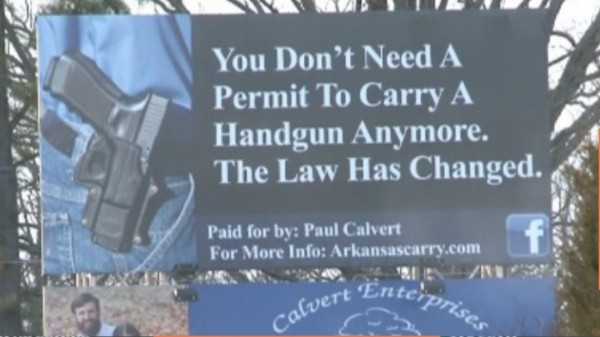 Arizona – -(Ammoland.com)- The questions about whether Arkansas is a constitutional carry state are over.  The result was never in any real doubt.  On April 4th, 2013, the Governor of Arkansas signed Act 746.  The law clarified a definition in Arkansas law, that had been abused over the years.  The change likely returned the law to its original meaning.  I wrote about it on 25 April. I wrote:

This change clarifies the meaning of the law to what was likely the original intent; that a person may not carry a weapon with the intent of using it for unlawful purposes. There does not appear to be other Arkansas law that forbids the carrying of weapons (except in certain named locations). Therefore it appears that Arkansas will have Constitutional carry.

The Democrat Arkansas Attorney General issued an opinion that muddied the waters.   A good dissection of it is here:

When issuing opinions on gun control laws, AG McDaniel will always react consistently; if the question can be used to smother out gun rights, he will do his best to do so. If McDaniel cannot restrict gun rights with an opinion, he will either refuse to give an answer or will muddy up the opinion so as to leave many more questions unanswered, as he did Monday. For decades, gun owners and law enforcement officers in Arkansas have been very confused as to how to interpret and follow the state’s gun control laws, and Dustin McDaniel uses his anti-self defense tactics to keep citizens confused and to restrict the exercising of their rights

But AG McDaniel’s tactic did not work.  Second Amendment activists in Arkansas started openly carrying in public marches, challenging officials to arrest them under the weapons law.  I have watched this issue for nearly two years.  I cannot recall any arrests.  Every prosecutor who said otherwise has backed down.  The open carriers triumphed, even in the face of direct opposition by a city council in Eureka Springs.  Even the Arkansas Law Notes grudgingly admitted that the law meant what it plainly said:

As noted above, John Threet, the Washington County Prosecutor, has directed the Sheriff not to arrest those carrying handguns, even without a permit, unless other circumstances suggest the person intends to use the gun to commit a crime such as robbery. Threet also reports that at the last meeting of prosecutors from all 28 judicial districts in Arkansas, only 2 were instructing police or sheriffs to arrest—though he emphasized this was not a formal vote but merely his sense of the room.

Second amendment supporters continued with their open carry walks, which were effectively educating the public about the law.  Then, AG McDaniels was term limited out.   The Republican candidate, Leslie Rutledge, won the 2014 election, and is now the AG in Arkansas.   A member of Arkansascarry.com,  Paul Calvert, paid for the billboard shown in the above photograph.  KTHV, a Gannet company, took the bait.  They asked the new AG for her opinion.  From thv11.com:

In 2013, former attorney general Dustin McDaniel issued an opinion saying he did not consider Arkansas an open carry state under act 746. We asked new attorney general Leslie Rutledge about her interpretation of the law. “I interpret it to mean an individual may carry so long as he or she does so without the intent to unlawfully employ it against another person,” she said. “But anytime law enforcement and citizens disagree on a law we need to ensure there is clarity to protect our citizens.”

The debate is over.  There is no longer any doubt that Arkansas is a constitutional carry state, as I wrote back in 2013.  It took a lot of work by a lot of dedicated open carriers to force the media into acknowledging the law.   They did the job, and the rest, as they say, is history.

What we really need is a National Bill ordering states to obey a law of the land that already exist. Universal reciprocity. Article IV of the Constitution MANDATES that all states respect the licenses, issuances, permits, etc,. of all other states.

In Jonesboro, AR, the city police and the State police in Jonesboro are towing Dustin McDaniel’s opinion! Jonesboro is Dustin’s home town. I’ve known him since we were in 10th grade. He was a Jonesboro city police officer for a short while, but not out of the goodness of his heart. Sad to say of a person who has been a friend for many years. Not anymore after what he did that ended his career. It is obvious that he did so to have on his resume to help with his political ambitions. But since he was a police officer,… Read more »

Find a safer school. ASU is a killing field and you are nothing but a target! Good luck…

Yep,im born and raised in Texas and at one time I was proud to say so but as the years have passed and I see all the things that are are being done to hold Texans back just make’s me feel shamed and horrified with this state and the leaders of the state.also if you think Abbot is the answer to open carry well your in for a awakening! dont forget he is the one WHO set all the stipulations for getting a Texas chl THAT KEPT MANY from getting one for stupid reasons. and wanting to know information that… Read more »

Easy for him to say – he lives in Arizona. Just finished my CHCL renewal. The instructor said what I knew all along. Technical corrections to the common law concept of journey. Don’t open carry, unless you want to meet law enforcement. And there are sound tactical reasons not to open carry. And if you have a CHCL in your pocket, you are violating the law, plain and simple.

When even Mississippi has more respect for people’s 2nd Amendment Rights than Texas it is time for politicians in Texas to be ashamed of themselves.

Wake Up, Texas–You are beginning to look like the New Jersey of the South in comparison to Oklahoma and Arkansas!!!

Pay attention COL! Governor Greg Abbott has already taken care of that matter. Texas is now or in the very near signing of law will be open carry.

Texas will be licensed open carry and our folks will be harassed none stop till it is fixed.

It’s HB375 this year! Be nice! Get on the phones, call your reps and senators and let them know SHALL NOT BE INFRINGED IS CRYSTSL CLEAR. Pass HB375! Now!

Still waiting in Texas for folks to get off their butts and help change the law. Come on Texas! They still make us pay for our rights in Texas and it’s embarrassing. It’s over 120million dollars, that’s what Texas makes of License to Carry holders. $120 MILLION. It’s 2017 and we still don’t have our rights back.

Isn’t it interesting to see that democrats and the BS media are consistent – they lie and lie and lie.