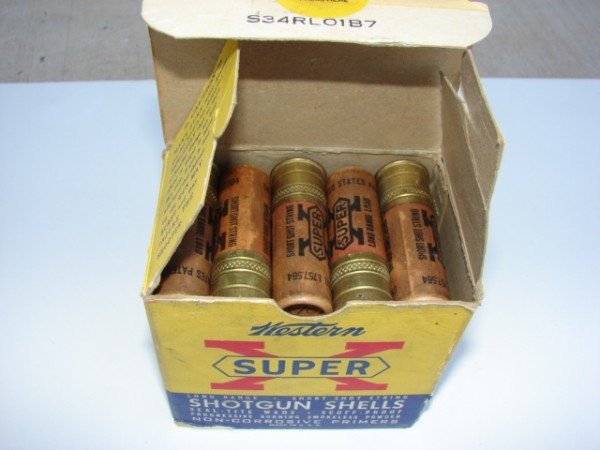 Arizona – -(Ammoland.com)- This box of unfired Western Super X shotgun shells was found at the last gun show in Yuma.  A friend had it on his table, someone had bought it 50 years or more ago, set it aside, and never used it.  The box has some wear around the edges, but all the printing and color is clear.  The cartridges are just like new.  Just look at the roll crimp.  These cartridges were never loaded into a magazine.

Number 7 shot is not common any more.  It is a useful size shot for everything from ducks to dove, but now you see #6 or #7 1/2, not #7.   I figured that at the price of $5 for the box of these old shells, I could afford to use them for dove hunting. But something happened when I got them home and started to look at them.  They evoked powerful memories and nostalgic feelings.  These shells were produced when I was a child, at the start of the litigation revolution that has dramatically altered the American social landscape.  They used obsolete technology: paper hulls, fiber wads, a roll crimp.  I love the colorful box with its advertising of all the Western brands. Notice the safety information printed on the inside flaps. Items that are a little more than common sense. Sure, I was taught about these risks, but they are not so obvious to the casual shooter.

Do not mix shotgun shells of different gauges in your pocket; you might drop a smaller gauge down the barrel and then a proper one. This has happened many times with a 20 gauge shell dropped in front of a 12 gauge. If the shooter is lucky, a destroyed gun will be the minimum of casualties.

Do not shoot modern ammunition in a Damascus or twist steel barrel. Damascus barrels can be strong, but they have more points where corrosion can cause structural weakness. This warning was learned through hard experience as smokeless powder came to supplant the older black powder. Strong, well made Damascus guns can be used with the proper modern ammunition, but considerable care must be exercised to do it.  The gun should be checked over by someone who understands the problem, and only low pressure loads should be used.

New shells made of plastic, with plastic wads, perform better than the old paper type.  Patterns are tighter and they are more water resistant.  Color coded gauges enhance safety. Technology has moved forward.

The Western brand was discontinued in the middle 1960's, replaced by the Winchester/Western label.  I do not know when the roll crimp was discontinued, or when #7 shot stopped being commonly used.

There were likely hundreds of thousands of boxes of ammunition like this manufactured.  I am not a cartridge collector in an organized way, but the art and manufacture of these items are a tribute to man's ingenuity and American productivity and freedom, all in one package.  The fact that I could casually walk into a show, plop down a $5 bill and walk out with these cartridges, all a completely normal, accepted, and legal activity, tells volumes about American freedom compared to the rest of the world.   I showed no ID.  I feared no informants or secret police.  I openly boast to the world of my purchase without fear of reprisal.

In contrast, one tiny .22 cartridge found on a London street sends all of England into a tizzy of horrified hyperbole.

I should probably shoot these cartridges the next time I go dove hunting.  It would make a good story to hunt 1 year old doves with 50 year old shells.  It is what they were designed and produced for.  Some might say that it is their destiny.  But maybe not. Maybe they were destined to sit on some shelf in a place of honor, a tribute to American exceptionalism, capitalism, freedom, tradition, and common sense.

I realize this is an old thread, but think it should be noted that the pictured shells are older than the box. The box got that design at the same time the shells got the star crimp–1948 or so.

Hi, Are those 20 gauge shells for sale?
Jerry

Just Googled Super-X 6-shot. One of my kids found one shell still in tact underneath our porch. Enjoyed reading your article. I’m sure a previous owner of our 1927 house used them.

Thanks for the trip down memory lane. I have a number of old paper shells I have in glass front cases. They remind me of the Christmas I found that Model 12 under the Christmas tree about 60 years ago, a 16 gauge that kicked like a Missouri mule. I recall it cost $107 from the local hardware store.

Winchester Model 12’s! Still one of the finest pieces of engineering and shooting perfomance regardless of the gauge selected. Technically, this also includes the Model 42 – 410 ga. Been shooting these shotguns in our family for over 75 years and never missed a beat. My shotgun of choice except for ducks and geeese. Will not shoot steel shot through my Model 12 barrels.

what a nice find, I remember them well, as I started hunting with an old browning semi
automatic when I was nine, and western super-x, and peters were the most favored
back then. brings back good memories of time gone by.

Sorry, do not have any 7 size shot. Your article was great. I have my Dad’s shells bought right before and during the depression in the 30s. I probably have more paper shells than the new plastic ones. Of course I have original Savage 300 rifle shells also. I have 22s from Montgomery Ward in black and red boxes. You sure brought back many memories with your article. I am still shooting 65 yrs or older 22 shells. Thank You for a great article full of memories.