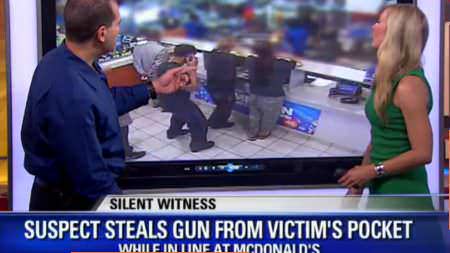 Arizona – -(Ammoland.com)- A handgun was stolen from the back pocket of a legal gun carrier at a Phoenix McDonald’s on Saturday, 30 April, about 3:45 p.m.

In a nation of millions of gun carriers, strange things happen. Both concealed carriers and open carriers have had handguns stolen from them in the past.  Concealed carry handguns are usually stolen after the gun is discovered during a robbery or assault. Open carriers’ guns have been stolen in a couple of armed robberies.  One of those was when the openly carried gun was required to be unloaded by law.  One concealed carrier’s gun was stolen after it was noticed by a thief; the permit holder was then shot when he pursued the suspect. The carrier in this case pursued the suspect, but was not shot. From fox10phoenix.com:

The male suspect came up behind him and stole the gun from his back-pocket holster and then fled the store.

The victim chased down the suspect, but the suspect then pointed the weapon at the victim, and then ran off.

I did not see any evidence of a holster.  As noted in the commentary by the officer, there does not appear to be any retention, other than gravity, of the handgun.

Note the line of the T shirt falls below the top of the back pocket on the right side.  Both legs of the victim are bent; this may have contributed to the exposure of the pistol butt.

In my experience, pocket carry is far more commonly practiced as a concealed carry method instead of a method for open carry.  I have observed and been told by many that they carry concealed in a pocket; I have never observed it or been told of it as a method of open carry.  While the report mentions a “back-pocket holster”, I suspect they are referring to pocket carry instead of an actual pocket holster.

The officers comments and the video are reminders of the necessity of situational awareness, and awareness of your carry system and its limitations.

The thief in this case seems to have been opportunistic.  He spotted the butt of the pistol, the inattention of the owner, and took the opportunity to make the snatch.  Almost any sort of holster retention would likely have prevented this theft.  The much maligned Fobus holster does not allow a pistol to be “slipped out”  it takes effort to do so and the effort is multiplied at unusual draw angles.

It is likely this suspect will be apprehended.  He is probably a local, and someone will know who he is.  A reward has been offered.

Both the victim and the suspect seem to be left handed.  The pistol is carried in the left rear pocket, and the thief uses his left hand to slip it from the victim’s pocket.  The “phone” in the suspects right hand appears to be camouflage, but he may be so casual about his thieving that he does it during a phone call.  One is reminded of the Zimmerman/Martin case.

Lee, ” indicated a person that was so angry that any self control would be impossible.” Now that is odd that you would say that. I am wondering where you got your psychology degree? You need to stop making assumptions. Especially about the history of the Jewish people. From what I can tell about people in general. I did not serve 22 year in the military as well as teach over 500 students and gain more awards and medals that most anyone else to be told by someone who assumes as much as you do to give your opinions much… Read more »

Hey there 5WarVeteran,
It sounds like you have a lot to be proud of. Me too… if I told you my background you would probably be surprised.
Kilroy was here.
Good luck and bless you… really.

Well, Dean, If you’re point is that we all need to be careful about keeping control of our carry firearm when out in public, point taken. The thing about people is that some are just brighter than others. For the victim of this theft the term situational awareness would seem to have little meaning. Open carrying in a back pocket? What’s that about? Hay look everybody, I’m a big dangerous guy cause I’m packing a gun? I have trouble seeing how amplifying this incident reinforces our argument that concealed carry is a good thing. As to the description of the… Read more »

It is obvious that you should never open carry unless you are already signally that you are armed; such as with police officers in uniform. Most officers assume that anyone open carrying is mostly interested in making a political point or looking for a fight. An AR over your shoulder… say hello to a very dangerous situation. The open carry laws are mainly designed to do away with lengthy statutes that must specify each boundary (hunting, fishing, etc.) can become difficult to enforce. Gun regulation is necessary, total gun control is not. My speech ends here… for the moment! PS-… Read more »

You do realize your statement is based on assumption and conjecture. Police and licensed security “Open Carry” simply because it IS a deterrent and that remains somewhat true of the individual. As to assuming what “most officers” think well that has a lot to do with the location. MOST police officers who see an “open carry” also recognize a responsible citizen. Yes there ARE locations where carrying a weapon like “an AR platform” can be seen as making a “Political point” even when doing so it completely legal. Too bad pussies all seem to see it that way. Now why… Read more »

We have always had forms of gun control. Something that you will probably be familiar with is the fictional (but factual) stories of some town sheriffs requiring people to leave their sidearm at the city limits. Our history on some form of gun-control goes back to before the Constitution was written. Our ((gun owners)problem is the misuse of gun-control. My assumption about what police officers think is anecdotal… but it is based on quizzing more than 100 police officers in six cities during the last few months. Every single one said basically the same thing: if legal, concealed is better.… Read more »

I think you need to do a little more research. I am a Jew calling out Zionist Khazarian non Jews. Zionists own the banks they own the media they own Big Pharma and they own your government. That is just the facts of things.
You can “believe” whatever you wish but belief is not necessarily fact. Good luck with that.

Mr. 5WarVeteran, Are there two people using the name “5WarVeteran?” I am asking because the anger that was demonstrated in the email that included “Zionist” and “pussy” indicated a person that was so angry that any self control would be impossible. Some of the other posts are written fairly well and thoughtfully. In any event, trying to save a group of people that wrote the original Bible that was the basis for the other two that followed is a noble, and I argue a necessary, undertaking. Would you give up your 1911 because someone developed a different platform that delivers… Read more »

Arizona is a “constitutional carry” state, so why in blazes did this man make it easy for his handgun to be snatched? As a CCW instructor, I advise my trainees to be as anonymous as much of the desert vegetation, and to carry concealed, to provide a surprise (“sorpresa” near the border) for an attacker. The Phoenix area has three notorious crime-ridden areas: Maryvale, Guadalupe and – YES – South Phoenix, where concealed carry is part of the daily uniform for survivors. For those with a choice, the best survival technique is to stay the h_ll away from these parts… Read more »

Are YOU done with your English grammar lesson?

Durabo offered something worthwhile. You didn’t.

Dude seriously? What “speech”? Is anything more than a gum wrapper too much for you? Two paragraphs does not a “speech” make.
Somebody piss in your Wheaties today?

I instinctively thought to myself, “Why would you ever want to walk around with a handgun in full view, or an AR over your shoulder?” The criminals are concealing… if you want to be ready to help you should be too. Every police officer I have ever spoken with believes that people who open carry are dumb, and just looking to bait someone into a fight. Gee whiz… no wonder the anti-gun people think we are crazy!

Speed, SURPRISE and Action of Violence. Why remove one of the three critical elements because of bravado and ignorance. The whole reason you carry is because of bad people so why carry in a method that easily allows them to gain the upper hand?
You wouldn’t stick $100 bill out of your back pocket and dare someone to take it would you?
Critique yourselves and ask even though this is legal is it smart?

5WarVeteran
Reply to  Matt in Oklahoma