(AmmoLand.com) Chosen for its light weight, smooth handling and commitment to tradition, Browning’s new A5 Sweet 16 shotgun was chosen by Sporting Classics Magazine as their Awards of Excellence Shotgun of the Year for 2017. 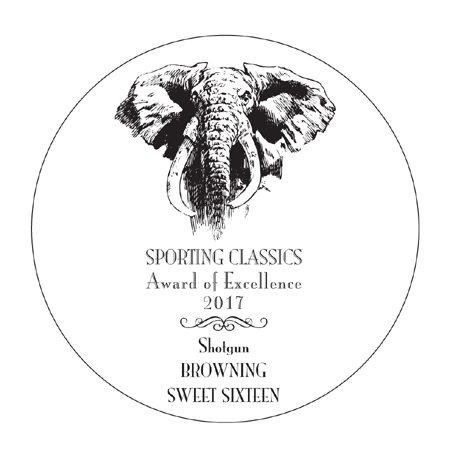 “Very seldom does the sequel exceed the stature of the original; almost never, in fact. On the other hand, Browning’s reiteration of their old, Sweet 16 gauge does exactly that. This time it’s an entirely new gun that’s feather-light, smooth handling, and built like you would expect a Browning to be built,” said Sporting Classics’ Robert Matthews.

Matthews went on to add, “Every once in a great while somebody gets it just right, and that’s what Browning has done with the new “Sweet Sixteen”. Their new fowling piece is all gun with no fluff, destined to be an instant classic. “

Rafe Nielsen, Communications Manager with Browning, was presented the award at the recent Safari Club International Convention. In accepting the award, Nielsen said, “The return of the Browning Sweet 16 has been a fun and rewarding project for Browning. It has been very encouraging to hear the positive comments from dealers and consumers who are excited about the return of this classic shotgun to the Browning line.”

I could not find where Browning is making these guns but at a MSRP of $1,999.00 I would hope it’s not China. If it is China I will be very disappointed in Browning.

It is my understanding that Browning is importing this shotgun from China. If so, so much for Buy American. Information re Chinese Imports should always be included, I believe.
Tom