USA – -(Ammoland.com)- Today, December 15, is Bill of Rights Day, a commemoration of its ratification in 1791 that too few Americans even appear aware of, let alone reflective of what it means. Established for official national observance through a proclamation by Franklin D. Roosevelt in 1941, the tradition has been carried on by succeeding presidents, including Donald Trump, whose own proclamation recognizes how rights exist to safeguard against government corruption and abuse.

Sadly, Bill of Rights Day is also the anniversary of the day Border Patrol agent Brian Terry died, killed by Mexican cartel criminals on U.S. soil. Recovered at the scene of Terry’s murder were firearms linked to the Bureau of Alcohol, Tobacco, Firearms and Explosives’ Operation Fast and Furious and a lethal practice known as “gunwalking.” Firearms were being allowed to cross the border in violation of both U.S. and Mexican law, resulting in untold numbers of people (estimated in the hundreds so far) being killed. A motive offered on the CleanUpATF whistleblower website soon afterTerry’s death was that it was done to “pad statistics,” setting the stage to justify more “gun control.”

And the Obama administration’s response, as exemplified by Eric Holder’s contempt of Congress charge, was to stonewall investigations. Despite all the heairngs and headlines, no one has ever been held truly accountable.

Terry’s surviving family is struggling to reconcile the lack of progress toward that accountability with a pledge candidate Trump made to them when on the campaign trail.

Kent Terry, the slain agent’s brother, explained to this column over a year-and-a-half ago what Donald Trump told him at a Michigan community college event:

“It’s a shame Fast and Furious started and shame on them for what they are doing about it. When I become president I will open the books on Fast and Furious and Brian. God bless your family Kent.”

Disappointed and frustrated by the absence of any action on that promise, Terry wrote a reminder letter to the president last June, which to date has been ignored. He is sharing it with AmmoLand Shooting Sports News in the hopes of producing some renewed interest and movement: 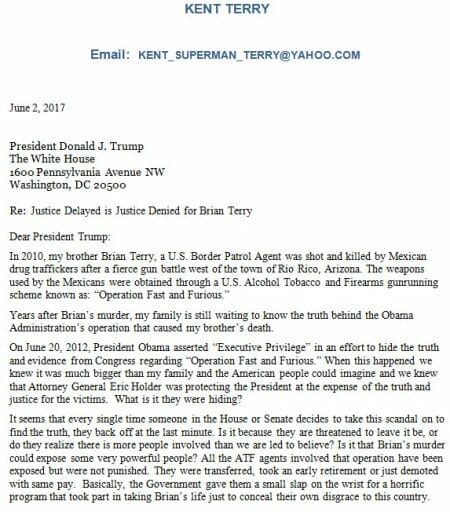 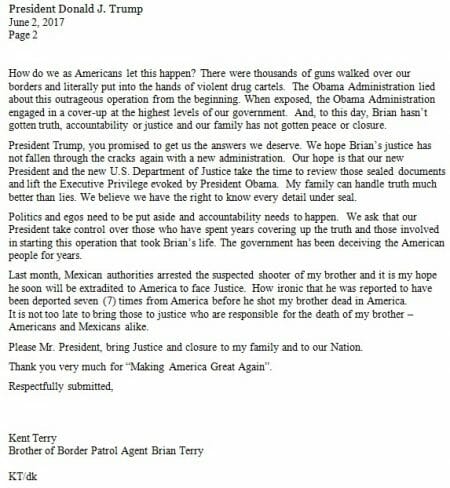 Terry is doing more than waiting around hoping for a response. He has also joined with this correspondent in a Freedom of Information Act request to determine what role the Department of State under then-Secretary Hillary Clinton may have played, and joined in a lawsuit to compel a response after the request was ignored. Attorneys have indicated some documents will be released in January, the scope and contents of which are unknown at this writing.

It’s understood that President Trump is very busy with no shortage of critical priorities that are global and national in scope and impact. But this should be such a priority, too, and there are concrete actions he can take now that will take significantly less time than engaging in Twitter flames over matters of less importance.

First would be for the president to publicly acknowledge his commitment to determining the truth about Fast and Furious, making it public, and using means at his disposal to ensure that appropriate legal remedies are pursued. That would include instructing the Secretary of State and the Attorney General to stop all stonewalling and fully cooperate with House Oversight and Senate Judiciary committees by making documents and records that have previously been withheld available to Congressional investigators. It would also include rescinding any executive actions from the Obama administration that had the effect of impeding those investigations, and instructing White House Counsel to stop shielding officials from testifying under oath.

He should also instruct the FBI to be forthcoming about its own Fast and Furious activities under then-Director Robert Mueller.

The Terry family — and all Americans who value truth and justice — should not have to face another Bill of Rights Day without answers.

I never thought I would ever advocate this, but with all the information coming in concerning the FBI, the Clintons, and their ilk , I am reminded of a statement I recall reading, it goes something like this; to resolve the take over by traitorous scumbags, the ballot box or the cartridge box!

if everyone follows the PROGRESSION of how everything is lining up i feel we the people are DRAWING CLOSER AND CLOSER TO THE CARTRIDGE BOX EVERYDAY.
because with what’s happening in our nation CAN’T CONTINUE OR WERE DONE AS A NATION AND PEOPLE, AND ACTION ALWAYS SPEAKS LOUDER THAN WORDS.

We all realize that Trump is busier than a one armed wall paper hanger and I am sure this is on his mind and will get it’s time in the limelight. With everything going on with all of clintoons crooked actions I think throwing one more thing in the ring, that deserves it’s own stage, will only serve to confuse the current investigations. Trump is a successful business man and he knows how to put things on the back burner and address them when the time is right. He has been badgered and belittled by the libetards long enough that… Read more »

The fast and furious investigation seems very similarly run ,
like the Clinton server (matter) investigation . Tangled in lies from ,
our government officials , And hiding facts of people and knowledge .
Who did what, Who knew what, Why was it done, Who gets in trouble ,
if we tell the truth ? I say full steam ahead , hang them all out to dry .

I too hope facts come out about Fast and Furious. I know one family who lived close to the border and ran a gun shop whose lives were destroyed because they refused to cooperate with the BATF and their Fast and Furious debacle. Never trust or deal with the BATF, they are the scum of the earth and considered by LEOs at all level across the country as the bottom of the barrel of law enforcement agencies.

@Joe martin, Yes, BATFE has a long history of dishonest prosecutions and playing politics. This is the first agency that should have had it bureaucrats fired down to the GS14 level, cease hiring, the Agency cars sold to the public for cheap, and offices sold or leased space let go. All with in the president’s immediate power. Give them till one day after Christmas and let the firings begin. Drain the Swamp.