U.S.A. – -(Ammoland.com)- “I just got the 2018 Hawaii carry license data via the monthly reports from each county police department and made a spreadsheet summary,” gun owner rights advocate George Pace tells me via email. “You’ll never guess … no one but security guards got licenses! Imagine that!”

Pace referred me to the deceptively-named “Straight Shooting: An Objective Review of Hawaii Firearm Laws and Related Statistics,” a Dec. 2018 “study” designed to justify infringements. Relevant to this report:

“This ‘report’ is a joke,” Pace observes. “In terms of providing any useful information as to whether Hawaii’s draconian ‘commonsense gun safety laws’ are effective, it provides no information at all.

“They don’t know. They don’t want to know, because the facts are that it makes no difference at all in crime rates,” Pace concludes. “All it does is intimidate and make more costly and time-consuming the process to acquire a firearm for law-abiding citizens.”

His spreadsheets follow—and by way of reading them, treat “Security” as unconcealed and “Citizen” as concealed: 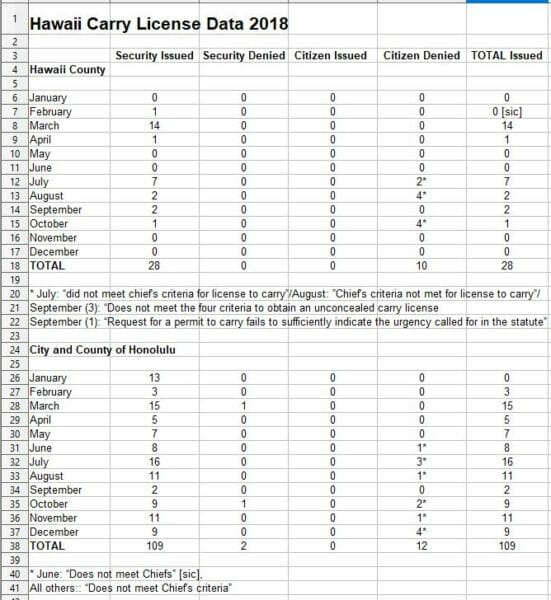 The Young v. Hawaii case, where a citizen who was not “granted” a carry license sued, is still in Ninth Circuit limbo pending a decision to hear it en banc.

“Until Young won, the AG issued the ‘famous’ opinion that unconcealed was NOT restricted to security guards in uniform and on duty, and NEVER had been!” Pace recalled. “That’s a blatant lie, and everyone, including the people working at the police departments who hand out and take in the applications for licenses all knew and would tell you ‘You can’t apply for open carry, that’s only for security guards.’”

He blogs at “The War on Guns: Notes from the Resistance,” is a regular featured contributor to Firearms News, and posts on Twitter: @dcodrea and Facebook.

Actually for them to say you don’t meet the qualifications for private CCW permit you could sue them for firstly taking money without reimbursement just like for faulty goods, secondly if you have no felonies you can’t be denied your second amendment rights and lastly it’s not actually up to a local cop or judge to make the decision it’s up to the nics and testing facility that’s authorized you demonstrate safe gun handling. If you look who actually handles the nics paperwork it sure as hell isn’t the local PD it’s the county highway patrol/sheriff and FBI office in… Read more »

Another State in the wrong.

Why do we have so much corruption in the usa? Simple we set on our asses at election time and let the likes of chuck and nancy get in office,same way at state level.
In 2020 we need to support trump and vote the scum around him out

@Robert, there is no profit in letting you be a free man, that is why. Nor is there any profit in letting Americans be a free people. To have “elites”… someone has to be a slave.
If we went back to running things by the operating instructions, more formerly known as the Constitution of the United States, America would be a much different place.

Why does a surfer or a hula dancer need a gun? Obviously they live in the safest state in the country. They do not have criminals. All they have to worry about is the Lava and their congressional representatives Fuck them and Kalifornia both. Oh my bad maybe North Korea.I think what this country really needs is to cull a few states!!!!

I lived and worked in Hawaii for nine years, up until early 2014. I worked there as a PI doing fraud work for insurance companies. When getting licensed there as a PI, I had to appear before all of the police Chiefs in the State for an interview, the licensing entity was included. I asked about getting a concealed carry permit during that interview and offered that while working as a PI in California I had possessed a permit for over 10 years with no incidents whatsoever. I received a collective laugh from all in the interview and was told… Read more »

Why do you need a permit to exercise a right that the government is prohibited from infringing upon?

I hate to say it, but as bad as the Aloha state is with cc permits, NJ is much worse – with 9M residents and only 425 outstanding civilian permits (not counting politicians or ex-cops).

TWO licenses have been issued since 2002. One to a judge in 2006 that was active for 16 months, and one in 2013 that was issued to a military member (or military family member) that was valid for 12 DAYS.

When it gets to these levels of unconstitutional infringement, it’s hard to make an accurate judgment about which is worse, but I think on the pure math days of licensed citizens per capita, Hawaii still leads the pack.

Hawaii, is mostly Japanese by population. So what do we expect?

@laughing Jack, a population of “bow and scrape”, just as the elites in our government want. The political parties have corrupted our system since the first day. Avaricious, self-centered, NUBs have populated the parties since before the first day.
Drain the District of Corruption swamp, Donald Trump, and we will drain the legislative swamp. IMHO

Hawaii, a whole another country. Just like Kalifornia. The corrupt politicians run it like their own little empire. Why do the sheep keep voting for the same old politicians over and over? There are other people running for office, are the sheep afraid to vote for new faces? Or do they like like the same old feces? And haven’t the Japanese and Chinese investors bought up half of Hawaii? These power crazed politicians want to put Lithium,Prozac, and Ritalin in the drinking water saying it’s for your own god good and if it stops only one suicide that it’s worth… Read more »

Term limit will only serve to make the dirtbags in politics serial dirtbags instead of lifetime institutions. Until the VOTERS wake up, give a care, and inform themselves as to who is whom and means what, nohting will change. There IS a downside to term limits: when we DO manage to get a decent guy in office, he’s gone far too soon. Think Ron Paul. Perfect guy? Nope. But HE saw through the smoke and mirrors, and rocked some boats. He STILL carries on in exposing the corruption and harm from keeing the Federal Reserve functioning. He’s been calling for… Read more »

The Supreme court needs to make a simple ruling like the 2nd amendment is no different the the 1st it applies to every citizen and no city or state can make any laws that will deny any second amendment right to bare arms anytime or anyplace open or canceled. They can not make or enforce any laws that prohibit the use of any item that designed to be used for such firearm. The Federal government is the only authority that can and enforce any rule and laws that apply to such weapons. The also need to inform all Federal Judges… Read more »

How does (our friend) the President not withhold federal funs from states denying the BILL OF RIGHTS……..the SUPREME LAW OF THE LAND????????????

Get back to me

AtG Sessions and his faulty replacement have been too busy about maintining the current level of swampification there in DC. But they can’t even keep their poop covered up in DC. Worthless….. or worse.

Hawaii, huh ? Gee, doesn’t ANYBODY remember that the original ‘Hawaii Five-O’ series was the first primer time cop show with an anti 2nd Amendment theme in just about every episode ? I have never forgotten the specter of Jack Lord ranting about the evils of private gun ownership in at least one episode out of every two.

Why is the NINTH CIRCUIT in CAL. ? Nothing (almost nothing) nothing ever comes out of it that only benefits the LEFT.

NJ is even worse. The process costs you lots of money and time and you get denied in the end for not having a valid reason according to the Superior Court Judge that reviews each app.

Try getting a “carry permit” in Maryland – the “may NOT issue state”.
You are 99% guaranteed NOT to meet the standards of Maryland may”NOT” issue requirements.
Besides the “exceptions” on your carry makes the “carry permit” almost impossible to carry.