The firm, Capitol 6 Advisors, will be offering a wide range of services to corporations, political campaigns and other groups. Some of these services will include long-range strategic public policy, public affairs consulting, crisis management, and brand positioning services. The firm will target clients with complex problems. The company refers to Cox as “Washington’s top problem solver.”

The company chose its name to symbolize their commitment to protecting their client base and “fixing” their problems.

“In military terminology ‘got your six’ is about the commitment to protect a comrade from harm that comes from outside their field of vision,” Cox said. “Similarly, the mission of Capitol 6 is to protect our clients and solve their most complicated problems – from brand strategy to unanticipated reputational and economic harm and also active mitigation of that harm when it occurs.”

Cox graduated from Rhodes College with a degree in history. Before starting to work for the NRA, he started his career as a congressional aide U.S. Rep. John S. Tanner (D-TN). His focus was on managing issues relating to the judicial system and criminal justice reform.

Cox spent nearly 25 years at the NRA-ILA. In 1995 he joined the gun-rights group. He served as the deputy director of the ILA Federal Affairs Division.

Later in 2002, He became the Executive Director of the NRA-ILA. He also served as Chairman of the NRA Political Victory Fund (PAC), President of the NRA Freedom Action Foundation and Chairman of NRA Country.

Cox claimed to have “left the 2nd Amendment far more secure than when I started at the NRA” and said he was “proud” of his accomplishments at the gun advocacy group. The lobbyist cited the election of Donald Trump and changes to federal gun laws such as lobbying Congress to let the “assault weapons ban” expire although critics point to the banning of bump stocks and the rise of red flag laws across the country as failures of the NRA-ILA under Cox’s leadership.

Cox denied being a part of a plot to take over the embattled gun-rights group calling the charges “offensive and patently false.”. The NRA’s evidence against Cox were vague text messages between him and Boren. Although the text exchanges were not a smoking gun, they did show all three men talked with each other.

Capitol 6 Advisors has not listed any clients at the time of this writing. 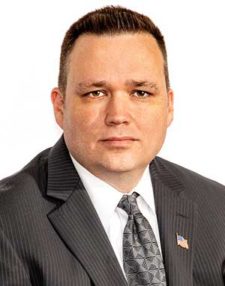 John is a NRA instructor and a constitutional activist. He is the former CEO of Veritas Firearms, LLC and is the co-host of The Patriot-News Podcast which can be found at www.blogtalkradio.com/patriotnews. John has written extensively on the patriot movement, including 3%’ers, Oath Keepers, and Militias. In addition to the Patriot movement, John has written about firearms, interviewed people of all walks of life, and on the Constitution. John lives in Northern Virginia with his wife and sons and is currently working on a book on leftist deplatforming methods and can be followed on Twitter at @crumpyss, on Facebook at realjohncrump, or www.crumpy.com.

With ‘friends’ like Cox, who needs enemies or competitors? Hire him and watch your company go down in flames.

Good ridance! We wish you hell.

” Cox said. “Similarly, the mission of Capitol 6 is to protect our clients and solve their most complicated problems – from brand strategy to unanticipated reputational and economic harm and also active mitigation of that harm when it occurs.””

Hmmm. I hope potential customers look at what Cox did for complicated problems, brnad strategy and reputational and economic harm of the NRA. Wonder how that mitigation effort of his went for them?

Epic failure, for sure.

His client list is “0” right now and that is where it needs to stay. Anything he does will not turn out well. He is not an attorney so he was just playing the part in the Negotiating Rights Away organization. Poor job at acting,I might add.
A history major should be teaching history rather than making negative history.

Notice that Cox does not mention any interest in the shooting sports? His interest is in making a fortune by being a briber of congresspersons. Maybe he should have worked for the National Greed Association.

I lost all confidence in Cox when he endorsed ‘red flag laws’ selling out the membership. Now he has sunk even lower into the DC swamp. Consultant=scum.

The man turned on his “Daddy”, LaPierre and got canned. The continuing story of LaPierre’s tyranical reign over NRA for his own personal profit. I guess Cox could only stand so much of LaPierre’s ass in his face and his lips finally wore out from all the kissing. Now we’ll see if the support of the 2nd Amendment by Cox was sincere or just another job and paycheck. I suspect the latter.

“Former chief lobbyist and principal political strategist for the National Rifle Association’s Institute for Legislative Action (NRA-ILA), Chris Cox, has started a new Washington, D.C. based consulting firm.”
“The firm, Capitol 6 Advisors, will be offering a wide range of services to corporations, political campaigns and other groups. Some of these services will include long-range strategic public policy, public affairs.”

He will end up lobbing against the 2 nd. amendment as he wines and dines the other low life scum that makes up the District of Corruption.