ATLANTA, GA – Don’t miss out – Monday is the last day to purchase memberships or donations for the American Suppressor Association’s Sic Semper Tinnitus Membership Giveaway! Join or donate today and you could win one of more than 13 awesome prizes!

Suppressor owners everywhere are being rallied to make their voices heard by joining ASA or buying a raffle ticket to support ASA’s legislative agenda. Membership in the American Suppressor Association amplifies everyone’s voices and provides the necessary funding to stay engaged in this essential fight in Virginia, Washington D.C., and throughout the country. Anyone who does so before March 2nd will be entered to win one of 13 prizes. Already an ASA member? As long as your membership is up to date as of March 2nd, you’ll be entered as well!

In order to win this fight, we need your help! 100% of the proceeds go towards ASA’s fight to protect and expand suppressor rights across the country.

Contributions or gifts to the American Suppressor Association are not tax-deductible. 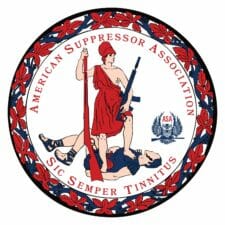 The American Suppressor Association is calling on suppressor owners everywhere to make your voice heard by joining or making a donation to ASA today! Do so now through December 2nd, and you’ll be automatically entered to win one of 12 prizes worth more than $15,000. Your membership makes ASA’s voice stronger and provides the funding that allows ASA to stay active and engaged in the essential fight to protect and expand suppressor rights nationwide!