U.S.A. –-(AmmoLand.com)- Michigan Secretary of State Joycelyn Benson has taken the dictatorial step of banning open carry at all polling places on election day in Michigan.

Open carry, in accordance with Michigan law, has been legal in Michigan for the entire history of the state.

It appears, by caprice or for political purposes, Benson has decided to change the long precedent for the 2020 elections. Benson is acting as a dictator, imposing restrictions the legislator and governor have refused to pass, although they have had numerous opportunities to do so.

Benson’s stated excuse is that people seeing others exercise their Second Amendment rights, might feel intimidated, and thus not vote. No other Michigan Secretary has issued such an order. 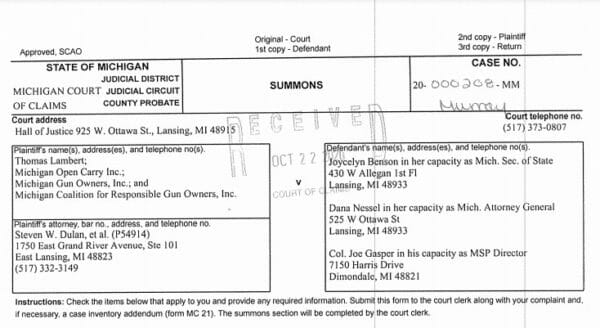 The leader of a group representing 385 Michigan police chiefs says the edict prohibiting open carry at all polling places is contrary to existing law. From detroitnews.com:

The head of the group that represents 385 Michigan police chiefs warned Monday that officers won’t be able to enforce Secretary of State Jocelyn Benson’s ban on openly carrying firearms at polling places on Election Day because the edict is not based in law.

Several Michigan Sheriffs are refusing to enforce the illegal order, saying there is no law to enforce.  From whml.com:

Murphy stated Livingston County Prosecutor Bill Vailliencourt has concurred the ban is unenforceable. He noted that people can’t point or wave guns or anything else, which would constitute intimidation or even felonious assault. Murphy said someone simply having a gun strapped to their hip or a long gun strapped on their chest or back is open carry and as long as it stays there, there’s nothing that can be done. As for the intimidation factor, Murphy says they can take enforcement if someone is being intimidated at the polls. But he clarified that someone just open carrying is not intimidation and not illegal. Murphy said if someone is open carrying a pistol or a long gun and they were to approach someone and make comments about who someone should vote for – that would put it into the category of intimidation.

State Officials say they will use State Police to enforce the order. From bridgemi.com:

Michigan Sheriffs Association executive director Matt Saxton called the order “a solution in search of a problem” and Ottawa County Clerk Justin Roebuck said the “legally ambiguous guidance … could incite others to challenge it on Election Day.”

Over the weekend, Nessel told Showtime’s “The Circus” that the state police would patrol polling locations where they believe sheriffs won’t enforce voter intimidation laws to ensure compliance.

Joycelyn Benson is a lifelong radical Democrat. She was aided in her run for Secretary of State by the SOS project funded by George Soros. The SOS project is dedicated to elect radical leftists so they can influence the administration of election law.

Dean Weingarten has been a peace officer, a military officer, was on the University of Wisconsin Pistol Team for four years, and was first certified to teach firearms safety in 1973. He taught the Arizona concealed carry course for fifteen years until the goal of Constitutional Carry was attained. He has degrees in meteorology and mining engineering, and retired from the Department of Defense after a 30-year career in Army Research, Development, Testing, and Evaluation.

Swany: While I appreciate and respect your comment, WE, the real Michiganders’, didn’t vote in the “Whitless I D I O T” regime! Ol’ Gorgie Soros’s dirty money and vote buying, did the trick! And remember, “Blue Lives Matter!”

If not for the legal Cannabis vote that was on the last ballot in Michigan, these Democrats would not be in office today.

The question I have is:
How can individuals GIVE MILLIONS of dollars during election times Without breaking CONTRIBUTION LAWS???????????
I do not care how many FRONT GROUPS are acting for the BRIBERY contributor!!!

From the Detroit Free Press LANSING A Michigan judge on Tuesday struck down Secretary of State Jocelyn Benson’s directive banning the open carry of guns at polling places on Election Day. Michigan Court of Claims Judge Christopher Murray said the directive amounted to an administrative rule under state law, and Benson did not follow the proper procedure. He issued a preliminary injunction against it. “It is is important to recognize that this case is not about whether it is a good idea to openly carry a firearm at a polling place, or whether the Second Amendment to the US Constitution… Read more »

Glad to see that the police/sheriff follow the laws that are written and not the rule of the powers that be at the stroke of a pen. If you fear your brother and sister so much because they have a gun then there must be something wrong with your people. These guns are there to protect, not attack and that is where your mindset should be. Have confidence in the person that they are of good nature and the reason for the weapon is because society has become so corrupt because there are bad people and bad people left unchecked… Read more »

Talk about voter suppression. She knows it would only serve to benefit the left. I think she might have under estimated our zeal.

So this Benson idiot thinks that local police and state police are going to go toe to toe with each other over a bogus proposition? I find it highly unlikely the state police are going to be derelict in their duty and defying the oath they took and find themselves at odds with their brothers and sisters unless of course they have been paid off by the state…. ? She’s a moron. Why do we vote these fools into office?

Benson needs to have her “order” shoved right up between her fat gluteus maximus!!! She is atypical of the the Communist Democraps in America! They believe that they can declare anything a “law” they want without approval of the legislature or the people!

Sounds like Michigan needs to insert themselves into the mix. And possibly even run the gambit of impeachment of the secretary of state

I didn’t read the article because I couldn’t get past the placement of the gun. LOL!

What’s wrong with the placement on his right hip?

Well, in addition to what Oldvet posted, I was thinking of the arrangement in regards to sitting without the holster/gun jamming into your leg. Anyone who has carried very much will admit that comfort will greatly decide how you carry a gun; barring operational considerations on occasion. Those that “appendix” carry are pushing their luck but if they do have an unintentional discharge at least they will stop the bullet with their own flesh and nobody else will shed blood because of their choice, so there is that.