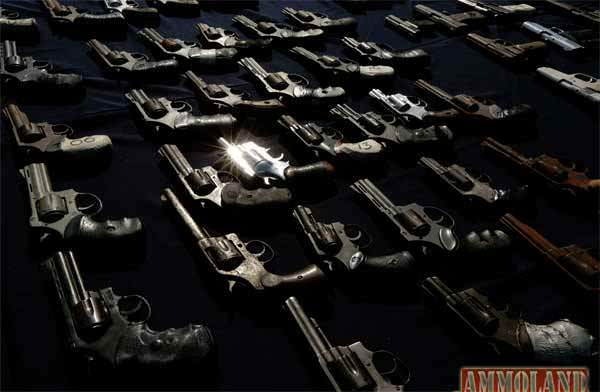 PEORIA, Ill. – -(Ammoland.com)- A Peoria, Illinois, man, Dajuan Edwards-Melton, 20, of the 2100 block of Antoinette Street, appeared in federal court today in relation to a criminal complaint that charged him with burglarizing a gun store and possessing stolen firearms on December 13, 2021.

The complaint alleges that in the early morning hours of December 12, 2021, Bloomington Police Officers were dispatched to “Smiley’s Sports Shop”, a federal firearms licensee located at 2049 Ireland Grove Road, in Bloomington, Illinois, for a reported burglary. Upon arrival, the officers observed evidence of forced entry to the business and shattered glass firearm display cases. It was later determined that 25 firearms were stolen during the burglary.

The complaint further alleges that additional investigation led officers to Edwards-Melton, who was found in possession of a firearm stolen from Smiley’s. He was arrested on December 13, 2021. In court, U.S. Magistrate Judge Jonathan Hawley ordered him temporarily detained pending the detention hearing on December 17, 2021, at 1 p.m.

If convicted, the maximum statutory penalties for the alleged crimes charged are up to ten years’ imprisonment, a fine of up to $250,000, and up to three years of supervised release.

Agencies participating in the investigation include the Bureau of Alcohol, Firearms, Tobacco & Explosives; the Peoria Police Department; and the Bloomington Police Department. Assistant U.S. Attorney Ronald L. Hanna is representing the government in the prosecution.

Members of the public are reminded that a criminal complaint is merely an accusation; the defendant is presumed innocent unless proven guilty.

“Agencies participating in the investigation include the Bureau of Alcohol, Firearms, Tobacco & Explosives; the Peoria Police Department; and the Bloomington Police Department. Assistant U.S. Attorney Ronald L. Hanna is representing the government in the prosecution.”