U.S.A. –-(AmmoLand.com)-– On day two of SHOT Show 2022, the subjective experience of this correspondence is: attendance increased over yesterday. There were clearly more media in the Press Room. Some of them reported delays in flights and difficulty in getting flights at all, which explained much. The number of media registered for the show is similar to 2020, approaching 2,000. The media has to pre-register, so transportation delays are inside of those numbers. 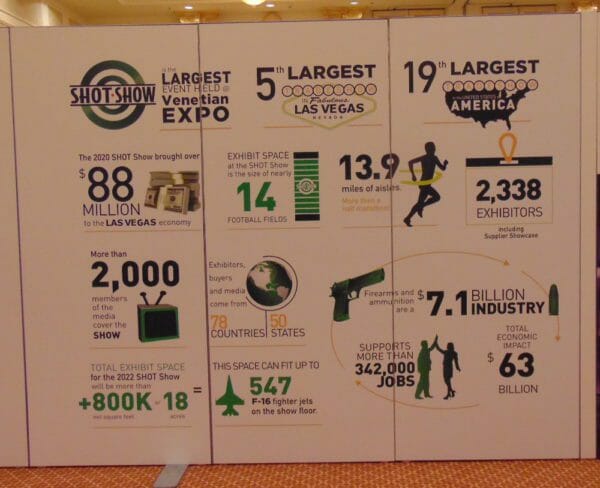 Attendance at the SHOT show is down for 2022, as expected, but not as much as the subjective experience would indicate. The number of registered attendees are very close to 42 thousand for 2022, and may go over; in 2020 they were 55 thousand, for about a 24% drop.  Some of those attendees had transportation problems and flight delays. The actual numbers in attendance will be known shortly after the end of the show.

Compare the SHOT Show numbers to the Consumer Electronics Show (CES), for the same years. The numbers for the CES dropped from about 170 thousand in 2020 to 45 thousand in 2022. That is a  73% drop. The CES show is the biggest conference-type show held in Las Vegas.

The number of exhibitors appears to be down slightly, maybe as much as 3-5 percent. However, the existing exhibitors are spread out of more areas, making the show less crowded and exhibitors easier to access. The combination of more space and lower numbers of attendees has made a dramatic difference in the ease of movement. There may be a change in the mix of exhibitors as well. Such is particularly difficult to quantify. Some exhibitors no doubt experienced transportation problems.

Talking to a few exhibitors reveals a positive experience. Some comments were: “a very good show”; “easy to get around and see the people we needed to see”; “I could just walk up to the person I wanted to see, and there they were”.

This correspondent had a quick look at the exhibits in the expanded space in Ceasar’s Palace. You go outside of the Venetian complex, though a good-sized outside area, and cross a bridge to enter the expanded space. It was a significant exercise simply to walk from the Press Room to the back of the expanded space.  Hundreds of interesting exhibits were passed by; in a show of this magnitude, you have to concentrate on a relatively small number of targets.  Here is an extremely limited example: I chatted with Reshet Graf about infra-red ID and targets, because of work I had done at Yuma Proving Ground; Thunderbeast about their suppressor designs; a long chat with Edward McInerney from Havasu City Arizona about his successful firearms manufacturing (formerly known as Plumbcrazy). He had an unbelievable show special of 5 complete AR15 type rifles at about $385 each to dealers, of course.

When or if the culture returns to “normal” the increased floor space facilitates much easier movement through the show. As the speed of commerce is accelerated, the efficiencies multiply. This benefits everyone, eventually. The SHOT Show needed to be expanded. It was always difficult to get around the show.

The 2022 SHOT show will be remembered as one of a kind.

Hi! thanks for sharing. Do you know that once you’ve filed your federal income taxes, you have time to wait until your refund comes from the IRS. It takes some time, usually about a month. In case you have immediate expenditures that need to be covered and you don’t want to take out a personal loan, source: https://fitmymoney.com/ There is a possibility to request an emergency loan in case a preparer or a special preparation service prepares your income tax return. This way consumers are able to apply for a so-called tax refund loan.

Last edited 3 months ago by jonasjoky1
-1

Great info. I’m looking forward to confirmed final stats on this one. Thanks!