USA – -(AmmoLand.com)- We have officially been using the EOTech VUDU 5-25 for a year now. We’ve tested it on several different rifles and shot it out to 1000 yards.

Most importantly, in my opinion, over the last year, any mishaps or issues should have arisen by this point. It has seen several thousand rounds of use over this period to give a sense of how it will perform for you long term. The most amazing thing about the Vudu 5-25 is the size; this thing is easily the smallest 25-power scope I have ever seen. I’d always rather have a smaller, lighter scope than one that is big, bulky, and heavy. Plus, the extremely short size will easily allow you to put any night vision or anything else you might want to add in front of the scope.

This thing is only 11.2 inches long; to give you an idea, my Leupold MK5, with the same magnification range, measures in at 15.67 inches long, and it’s just barely longer than my Trijicon Accupower 1-8. Basically, you’re getting a 25 power, a first focal plane scope that is essentially the length of a low power variable optic, something in the 1-6 power range. If size is at a premium for you, there is nothing more compact right now than the VUDU 5-25, with this much magnification. The most important thing about the size is you really aren’t making any sacrifices for it. Eotech and VUDU have managed to squeeze all the features and quality you would want in a high-end scope into a package this small.

As I said, this scope is a 5-25 power, has a 50mm objective lens, and a 34mm main tube. I do want to note that I’ve heard from several people that some one-piece mounts won’t work because the scope is so short that the mount won’t allow for it. I will say that I’m using Scalar Works Leap mount which is always my first choice in mounts, and it works perfectly, almost like it was made for it.

Another thing I like is you can zero the optic without tools. Just get the gun and scope lined up and unscrew the top cap. Lift the turret up and place it on zero. I also like that the zero actually lines up perfectly with the hash mark. Sometimes, systems like this can be slightly off, and somewhat frustrating. Screw the cap top back on, and you’re ready to go. There’s an indicator on the top of the turret to let you know where you are in the turret. The windage turret is capped, and I like that. I never dial for the wind because it just changes constantly, so I zero it and forget it. VUDU also made this toolless; to disengage the turret, you can use a coin or the side of a bullet to unscrew it, move the turret to the desired position, and put it back together. I think that it is a huge deal that you can take this scope out to the range and zero the scope without any tools. No need to hunt down some tiny ass Allen wrench and hope that you have the right one. It’s simple, it works, and it zeros without any tools; major thumbs up in my book!

All of the controls are really intuitive. On the left side of the scope, you have the parallax adjustment. For those unfamiliar, this is focused for the scope at different ranges, and the approximate yardages are given. This one goes from 45 yards to 1000 and then infinity. Which means that you have a very wide adjustment spectrum. Next to that, you’ll have the buttons for the illumination; the top button powers the illumination on and off, the forward-facing button lowers the brightness, and the button closest to the shooter makes the illumination brighter. Any button will turn the illumination on, but only the power button will turn it off. The illumination will automatically go off after about 2 hours to preserve the battery. The reticle is beautifully lit and well done. I will say, though, the illumination is not overwhelmingly bright in any setting. It’s definitely not daylight-bright, and definitely, something that’s more of a twilight or dusk-only thing. Now that’s not a huge deal to me, but if that’s a deal-breaker for you, that is just the way it is.

Moving back, you’ll have the power magnification adjustment, and I love that the EOTech VUDU 5-25x comes with a quick-throw lever. This lets you quickly and smoothly adjust your magnification. It also stops just shy of where the bolt will be, so they should never be getting in the way of each other. Behind that, is the eye focus, letting you dial in the crispness of the reticle for your eye. Let me just say, that all the adjustments are very good, and what you would expect from a high-end scope of this caliber. The turrets have audible and tactile adjustments, and the parallax and the magnification adjust smoothly, but affirmatively, with no slop. The scope is also pretty lightweight at 29.5 ounces for a 25-power scope.

We ran 1000 rounds through a SCAR20 with this scope on it, and SCARs are known for being extremely tough on optics. The EOTech VUDU 5-25x held up great, with absolutely no issues, even with all that time on top of a SCAR. Glass is really nice and clear, but maybe not quite as clear for as instance the Leupold MK5HD or a Khales; but still really, really, good. If I were going to rank it on a 1-10 system, it would be about a 9 out of 10, and the best glass I’ve seen on a Japanese-made scope. Don’t really think you’re making a sacrifice in glass clarity, but if you’re used to one of those really high-end scopes, it’s just shy of that. I also think it’s important to note the VUDU is a little less expensive than the Leupold MK5HD and a lot less expensive than the Kahles. 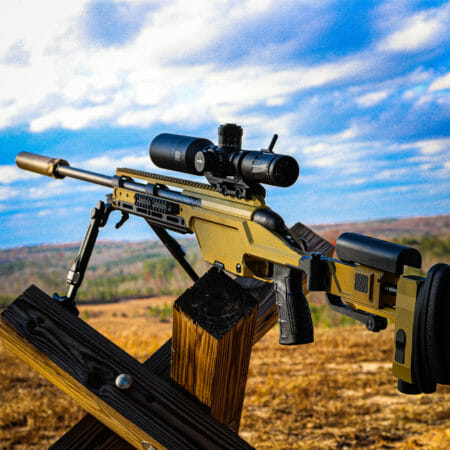 I see so many great uses for this scope. If you have something like an AR10 and don’t want a massive scope on the top, this fits that bill. Actually, anytime you want a smaller, full-featured scope, this is it, and you really make no sacrifices for the size. Also, if you’re setting up a rifle and aren’t sure about magnification, this lets you go from 5-25 without taking up the space a normal 25-power scope would. I really hope that this becomes a trend and that we see some other manufacturers try to make full-powered, full-featured scopes in small packages like this VUDU. If you can’t tell, I’m a huge fan of this scope, and I can see it getting a permanent home on my Desert Tech SRS A2. I think it will be perfect on that rifle and just add to the compact package.

We conduct in-depth, unbiased reviews on firearms and accessories. We are made up of all different backgrounds to give you the best range of opinions, including military experience and gunsmith work. Be sure to check out our Facebook and Instagram.

Unlike many channels out there, we make it a priority to respond to your comments. We enjoy engaging with our followers and will gladly answer any reasonable questions you may have.

Some of the links on this page are affiliate links, meaning at no additional cost to you, Ammoland will earn a commission if you click through and make a purchase.
Subscribe
Login
Please login to comment
5 Comments
Most Voted
Newest Oldest
Inline Feedbacks
View all comments

Your article does not mention the type(s) of reticles available on this scope. I had to go to another web site to find out.

After reading this review I purchased the Eotech Vudu 5-25x MD3-MRAD along with the Scalarworks Leap 9 scope mount, which was also reviewed by Alabama Arsenal. I got the scope for $1399 from Battle Hawk Armory and the Scalarworks scope mount for $359.10 with their 10% discount. The scope comes with a 3″ sunshade, throw lever, bikini cover, battery, lens cleaning cloth, owner’s and reticle manuals and some swag decals. QUALITY construction on both the scope & the mount and in 5 minutes I had the scope mounted, leveled and mounted on my Scar 20S 6.5 CM. The Vudu replaces… Read more »

Sun shade or not ?