U.S.A. -(AmmoLand.com)- Since suppressors take forever to get, I love buying multi-caliber high-quality cans like the new SilencerCo Hybrid 46M.

The only problem is that most of the time, one aspect of the suppressor’s performance is sacrificed to make the can more versatile. Some cans use a larger diameter bore to accommodate larger rounds which allows more gas to escape when running smaller calibers resulting in a louder report from the gun. Other suppressors use heavier-duty materials that make the suppressor heavier than it needs to be which can be an issue on pistol suppressors since that extra weight can potentially interfere with reliability. But by pure black magic, the Silencerco Hybrid 46M lets you have your proverbial cake, and eat it too.

OK, it’s not black magic (at least they say it’s not), but rather the culmination of several smart design choices that overcome the vast majority of these shortcomings. But first, let’s take a look at what the Hybrid 46M is.

Essentially, the new SilencerCo can is an overbuilt, compact muffler. While this is elementary info, it’s important to shooters new to the subject matter. The Hybrid 46M functions like all suppressors by reducing the report of the fired shot by slowing the release of the hot gasses used to propel the projectile. It accomplishes this with a series of baffles which are small discs with a hole cut in them the size of the desired projectile. And since gas – like electricity and water – follows the path of least resistance, it deflects off the back of the projectile and into the small pockets divided by the baffles.

In doing so, the gas has time to dwell and to slightly cool. This affects the audio volume of the shot much, in the same way, slowing releasing the air out of a balloon is much quieter than popping it with a pin.

But if all suppressors function this way, what makes the Hybrid any different?

First and foremost, the Hybrid 46M consists of two main components: the core suppressor, and the extension.

Without the extension, the Hybrid 46M weighs 12.2 oz and measures 5.78 inches. It still retains all functionality and durability but in a lighter more compact package. The biggest difference is the decreased sound suppression performance due to decreased internal volume. But make no mistake, the can is still very quiet with the proper ammunition and host firearm.

But if the shooter wants a quieter experience, they simply remove the end cap and install the extension which brings the Hybrid 46M to 14.9 oz and 7.72 inches overall. And this is all great, but here’s the thing – two-piece suppressors already exist, and hell, even SilencerCo makes one already. So what’s the big deal?

The big deal with the Hybrid 46M is the fact that not only is it modular, but it can also function with every caliber from .22lr to .458 SOCOM and .460 S&W! But even more impressive is that in addition to all these features, the Hybrid utilizes the Charlie system to mounts from SilencerCo, as well as tri-lug adaptors, pistons, and even direct thread. Meaning shooters can mount this thing on just about any gun they have, other than anti-material rifles and shotguns.

“OK, that sounds awesome!” You might be thinking, but it still leaves an important question unanswered, “How did the Hybrid 46M perform?“

In a word – predictably.

Make no mistake, I’m a huge fan of SilencerCo products. My first two suppressors were a Saker762 and an Osprey 45. Both of these cans have seen more than 20,000 rounds fired through each of them and they still sound just as good today. (Although I really need to clean out the Saker, which now weighs an additional two ounces due to carbon buildup from mounting it on automatic weapons!)

Back to my point, the Hybrid 46M was predictably excellent in both its performance and construction. It feels bomb-proof without weighing as much as my Saker while offering better performance when in the long configuration. But I wasn’t happy just running the Hybrid on one or two guns, so I mounted it on eight. And in every instance, the Hyrbid had no effect on reliability, while reducing all the gunshot volume substantially. In particular, the Hyrbid was an absolute blast to run on my Century C93 (HK93 clone) with a friend’s registered HK auto trigger pack, where it held up flawlessly after three back-to-back magazine dumps.

In my opinion, absolutely. Between its modularity, adaptability, and stellar performance, this is a must-have suppressor for shooters who have several guns they want to suppress and want a common mounting system among them. Plus, with an MSRP of $1,117, the Hybrid 46M isn’t priced like a high-dollar can despite offering top-tier performance.

When he’s not reviewing guns or shooting for fun and competition, Jim can be found hiking and hunting with his wife Kimberly, and their dog Peanut in the South Carolina low country.

Some of the links on this page are affiliate links, meaning at no additional cost to you, Ammoland will earn a commission if you click through and make a purchase.
Subscribe
Login
Please login to comment
6 Comments
Most Voted
Newest Oldest
Inline Feedbacks
View all comments

I find it odd that several Years ago the first thing you read in the specs on a suppressor where the decibel reductions, nowadays looking at suppressors for sale that information is rarely ever even mentioned in the advertisement, or articles. 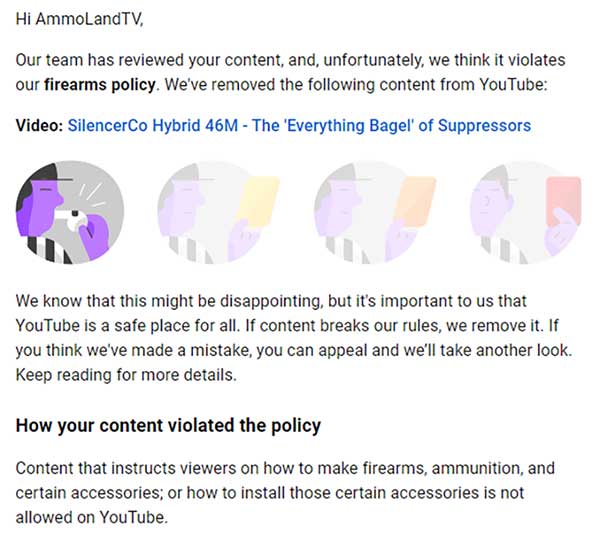 Then they link us here: LEARN MORE

Hummm, this article was originally posted over a year ago? Why not clean it up and link a Rumble video instead of the blacked out YouTube mess? Seems like the thing to do if you’ve going to post reruns.

Content producers need to wake up, especially after the Twitter Diaries have been produced, and get off those sites that hate us and that do everything possible to harm the 2A community. It’s stupid to stay on those platforms when there are options. Options from people/organizations dedicated to Freedom.

How do you clean a sealed can like the Saker?

What is the decible reduction bill org the base and then with the added extension, with a specified gun, barrell length, and ammo?

Also what are the resulting velocities of those specified things?