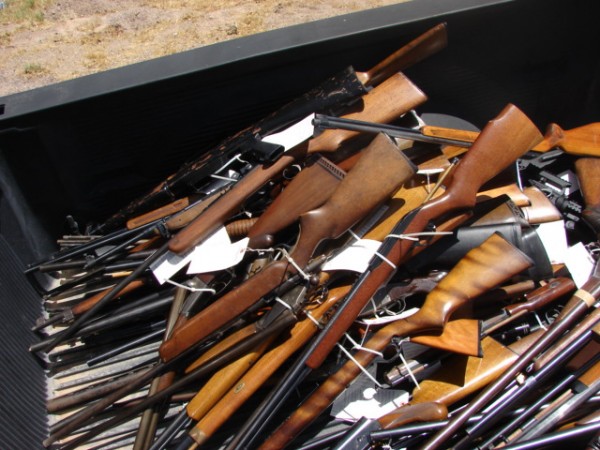 Arizona – -(Ammoland.com)- There are at least four model 60 Marlins or variants in this photo from a gun “turn in” in Phoenix two years ago.  The people turning in the rifles might well have paid less for the rifle new, than it brought at the politically correct turn-in.

I just listened to a recording of the Ferguson police shooting.  It was not clear what direction the shots came from, or how far they were from the person doing the recording.  But the cadence of the shots, and the information about what happened to the police give plenty to speculate on.  I do not claim any inside sources from Ferguson, or any knowledge about the evidence collected there.  So, here are SWAGs (Scientific, Wild, After the fact, Guesses.

First, from the nature of the wounds, given that a bullet was said to be lodged below the ear of one officer, and that both officers were released from the hospital in less than a day,  it was almost certainly a .22 rimfire that was used.

This makes sense, as it is the most common cartridge in the country, even with the run on .22 long rifle cartridges for the last two years.  About four billion of these cartridges are sold and used in a “normal” year.  In the last couple of years that number is closer to 5-6 billion.  The demand in the United States has far outstripped supply; we are importing all that can be produced overseas, and begging for more.   The common .22 long rifle round has plenty of power to do the damage being talked about to a few hundred yards.  Hitting a small target past 300 might be a little difficult, but from 100 to 150 yards, as is mentioned in the Ferguson shooting, it would not be a problem.

The .22 long rifle has another “fit” to the shooting.  From the recording, my best SWAG is that three shots were fired.  The person doing the recording turns 90 degrees in the middle of the shooting, and because of the changed direction of the mike, the middle shot seems to produce more echoes.  I believe that it was three shots, and the time would be 3 seconds, start to end.

Shooting aimed shots that fast is not impossible from a good, supported position, and it is much easier if you are shooting a firearm with almost no recoil, such as a .22 rimfire rifle.   Put a scope on the rifle, and relatively precise aiming at 125 yards is pretty simple.  It is almost as easy to do with open sights, if you are young and your eyes are good.   Hitting an 8″ target at 150 yards is well within the grasp of most people, with the most basic instruction.   While recorded sounds can be tricky, the shots do not sound loud enough to be more powerful than a .22 long rifle cartridge.

These rifles and the  telescopic sights for them are ubiquitous in American society.  They are almost never used in crime because they are hard to conceal, and relatively low powered.  All body armor will stop these rounds easily.

My guess is that one officer was targeted and hit with the first shot; the other two shots went a bit wild, one missing and the other hitting the second officer by chance.  While virtually all .22 repeating rifles can be fired as fast as the shots timed in the recording, the most common .22 rifles sold are .22 semi-autos.  They are the easiest repeater to manufacture and the most popular.  I will even venture a prediction as to the model and manufacturer.

It was probably a Marlin Model 60 or variant.  11 million have been sold of just this one model.  Many are sold with an inexpensive telescopic sight.  They used to be the most popular rifle in the United States, before concern about a potential “assault weapon” ban drove AR-15 type rifle sales through the roof.  They are likely one of the most common guns stolen, because there are so many of them.  I do not mean to slight the Ruger 10-22, with more than 5 million sold, or the numerous Savages, Springfields, Winchesters, Remingtons, Nobels, Brownings, Smith & Wessons, or numerous other brands that have been sold over the last century while the .22 rimfire semi-auto has been popular.  No one knows how many there are in existence.  Up until 1968, no serial numbers were required, and for good reason.  As stated, they are almost never used in crime.

A conservative estimate would be something in excess of 25 million of these semi-automatic rifles in existence, perhaps as many as 50 million.  They are very popular, inexpensive, and useful.  With just a little care, they last almost forever.  The mild .22 LR cartridge is easy on the actions and the bore.

Marlin makes a great all around useful rifle for the price, a superb example of capitalism making excellence available to the common man.  It will be sad if they receive any blame for the actions of socially irresponsible criminals.
c2014 by Dean Weingarten: Permission to share is granted when this notice is included. Link to Gun Watch

Wild speculation on your part. Cops say it was a .40. Can you say Towanda Brawley?

This article just show’s-to-go-ya that Dean is just as guilty as the MSM of “creating” news without getting the facts. What say yee Dean ?

They’re saying they recovered the handgun used in the shooting. I also read the shooter was 125 yds away. To me, that’s pretty darn good shooting with a handgun!

Dean needs his hearing aid tuned . That was not a 22lr.

Who cares what type or caliber? The ‘anti-gun’ movement and their ‘media acolytes’ will use the incident to further their cause.

@fish hunter,too funny ! You know what ?….I dont trust the gov’nt to tell the truth either !!!

I would NEVER state that making shots from a .22LR over 100 yards would be easy. I’ve seen too many people with their .22 sighted in at 50 yards completely clueless of how to even get onto paper at 100. In my experience attempting this with run of the mill high vel .22 is a mistake as well. So how would you explain an urban dweller running something along the line of Eley ammo in a cheap Marlin that happens to be zeroed for over 100 yards? Unless it was Marky Mark, offhand, in a boat, from 200 yards away.

The police are now saying it’s a .40 handgun. Hard to believe that he hit the target from almost 200 feet away.

The ATF just tried to ban the H855 round and now they are considering all .223 ammo. This just adds fuel to the fire.
I would not be at all surprised if an “agency” was involved in this. It is hard to create civil unrest, instability, and economic collapse and call for martial law with the entire population armed. I would bet George Soros has some knowledge of this.

The doctors and damage assessment professionals should easily determine the caliber of the gun used. There is even a slug still in one of the victims which they can extract if need be. I believe that might be a good idea because the rifling grooves should be on the bullet and would help determine exactly which of the millions of guns was used. You state that an 8″ size target would be fairly easy to hit, however, in a crowd and shooting offhand it would be more difficult. But, perhaps the shooter was not shooting offhand, he could have been… Read more »

The whole jest of this incident is summarized by the fact that the “ObamaMama’s” adamantly swear that the shooter(s) weren’t “from r’ hood”; but at the same time don’t put much effort into finding out which “hood” these low-lifes were from, and put an end to it! Is it any wonder why the police in Ferguson respond like they do?

sounded to me like a supersonic round. crack-crack-crack sound stops followed immediately by a man crying in pain. not 22. typical street width 8-10 yards per lane. 3-4 lane road. 30-40 yards. shots fired at est 110 yards 22 goes subsonic after 50 yards. protestors were at est. 70 yards from the shot. you shouldnt hear the bullet fly.

It was a centerfire .22 in my opinion. I have heard the tape, and having been shot at by .223 to me that’s what it sounds like going by at any distance.