USA – -(Ammoland.com)- The Springfield M1A Rifle is a descendant of the US military’s M14 rifle that was descended from the M1 Garand.

The rifle is a longtime favorite with shooters everywhere due to its accuracy, but has some shortcomings, most notably the ability to add a silencer to the rifle.

This is due to a number of reasons. First being the rifle’s muzzle device.

The author moved from a ban state to a free state over a decade ago and one of the first things that had to go on his M1A Scout/Squad was the muzzle brake. It made the rifle too loud and was unsightly. At the time we contacted Smith Enterprise of Mesa, Arizona, for a Vortex Flash Hider and a new gas lock with a hooded front sight.

Ours was marked OIF (Operation Iraqi Freedom) and was the same being fielded by our troops on various DMR rifles.

The Vortex allows the installation of a Wind Talker Sound Suppressor, but those are hard to come by, so when we went with a can for the M1A, we opted for Advanced Armament Corporation’s 762-SD and had to change out our Vortex for one of AACs adapters.
The quest does not end there. That just allows the installation of the can, here is where the second issue comes into play: the gas system.

After the author picked up his AAC 762-SD from “Silencer Jail” in January, we went out to the local shooting area on BLM land to see if we had just wasted money or if the silencer would actually perform. We tried it on an HK91, AR-10, a few AR-15s, HK93 and finally the M1A Scout Model.

The noise levels were very low, 7.62 NATO is a supersonic round and it would definitely not be as quiet as a pistol can, but we were impressed. Firing the other semi autos was rewarding and the first few rounds from the suppressed M1A had me wondering, “Why does everyone say this is problematic?”

On the fourth round, I found out the hard way. A blast of hot gas caught me in the face. In fact, I felt the burn for a few days afterward.

It was time to find out a solution for this, because the rifle was still very quiet for what it was.

The primary culprit is the open back receiver for this platform. The gas comes straight back toward the shooter’s face. Shooting a suppressor like those made by OSS ( Operators Suppressor Systems ) will cure this problem as their turbine like system traps the hot gasses within the body of the suppressor. The author however prefers a silencer that reduces noise more so than the hot gasses that are a side effect of the firing sequence.

One method is to go to a Schuster adjustable gas plug, which allows the shooter to regulate the amount of gas coming back into the system. Schuster recommends the SOCOM model for a suppressed M1A as it gives more of a workable area between the front of the plug and the rear of the can. It takes some experimentation to get it just right and needs to be adjusted again when shooting unsuppressed. For this reason we held off on the Schuster plug for the time being.

Another method is to use a different stock or chassis for the M1A or even a scope mount if you are running optics. The author prefers to run with open sights on the M1A and a stock that retains the look of the original design. So those solutions were off the table.

Finally, a thought came to mind, based on another product produced by Smith Enterprise: a blank firing adapter.

A blank firing adapter or BFA is used by the military for force on force training with MILES gear. As no round is being discharged, more gas needs to move the piston rearward in order to cycle the action and chamber the next blank. With over 60 years of service behind it, there has to be a viable method for our soldiers, sailors and Marines to train with the rifle without burning their faces.

We found a device called a breech shield adapter in US inventory. This is a folded piece of Parkerized metal that fits into the stripper clip guide and is held in place by a detent ball. It keeps gas out of the shooter’s face when running blank cartridges with a BFA, but would it work with a silencer?

Enter Fulton Armory to the rescue. They had them in stock for $10 plus another $10 for shipping. It was easily the lowest cost solution and after fitting it to the rifle, probably one of the more effective solutions.

After running 200 rounds with the breech shield in place and the silencer secured to the muzzle, we experienced no burns of any kind.

However there are two drawbacks to this answer: you lose the ability to feed via stripper clips and it gets the rifle very dirty. Firing 200 rounds looked more like 2000 rounds!

Not convinced on Suppressing The M1A route above? Then check out ASCBLUEYE’s video take on the same goal.

I have an M1A custom Super match, Loaded. 10 twist 5R bl, Obermeyer, double lugged, max Bishop stock, Nightforce NSX 5.5 x 22. I built this rifle to shoot Leg matches and now I am too old to get into position. I have zeros out to 1000 yds. from shooting across the course. So I made it an M-21. I use an AAC 7.62SDN-6 and installed it with no trouble. This is a 1/2 min gun and still is with the suppressor. The AAC flash hider replaces the front sight. I will install a schuster gas plug. When I shoot… Read more »

Thanks for the range time with your M14. Awesome

The SureFire SOCOM 762 works well to suppress the M14 rifle and with less back pressure. The QD on the SureFire is fast with a vault-tight lock-up. Pics here … 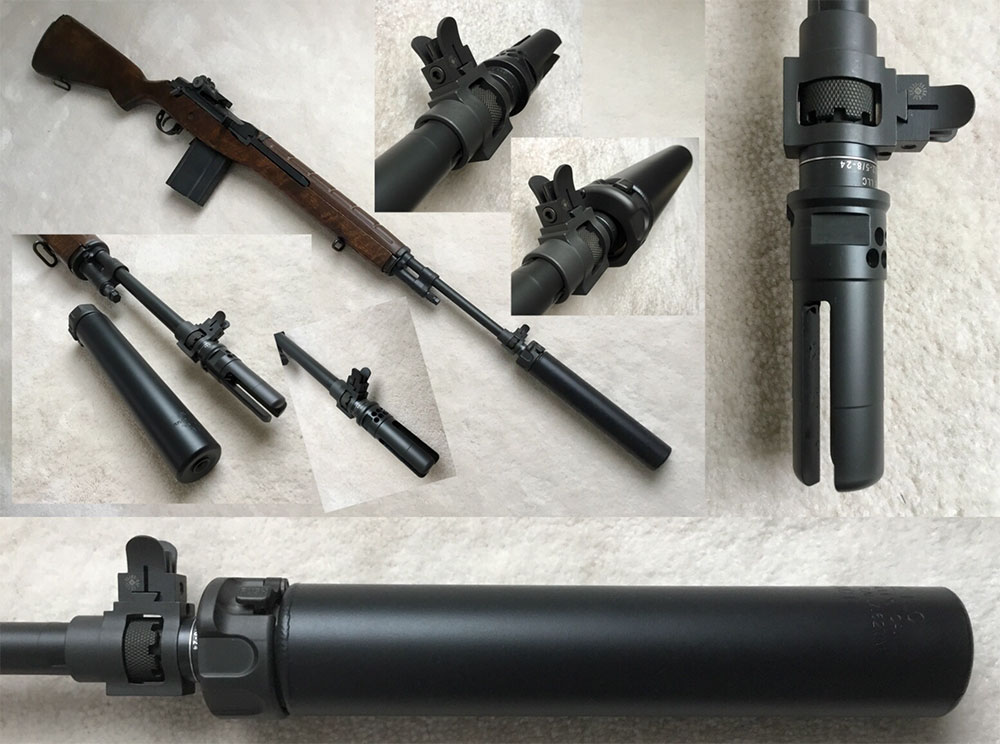 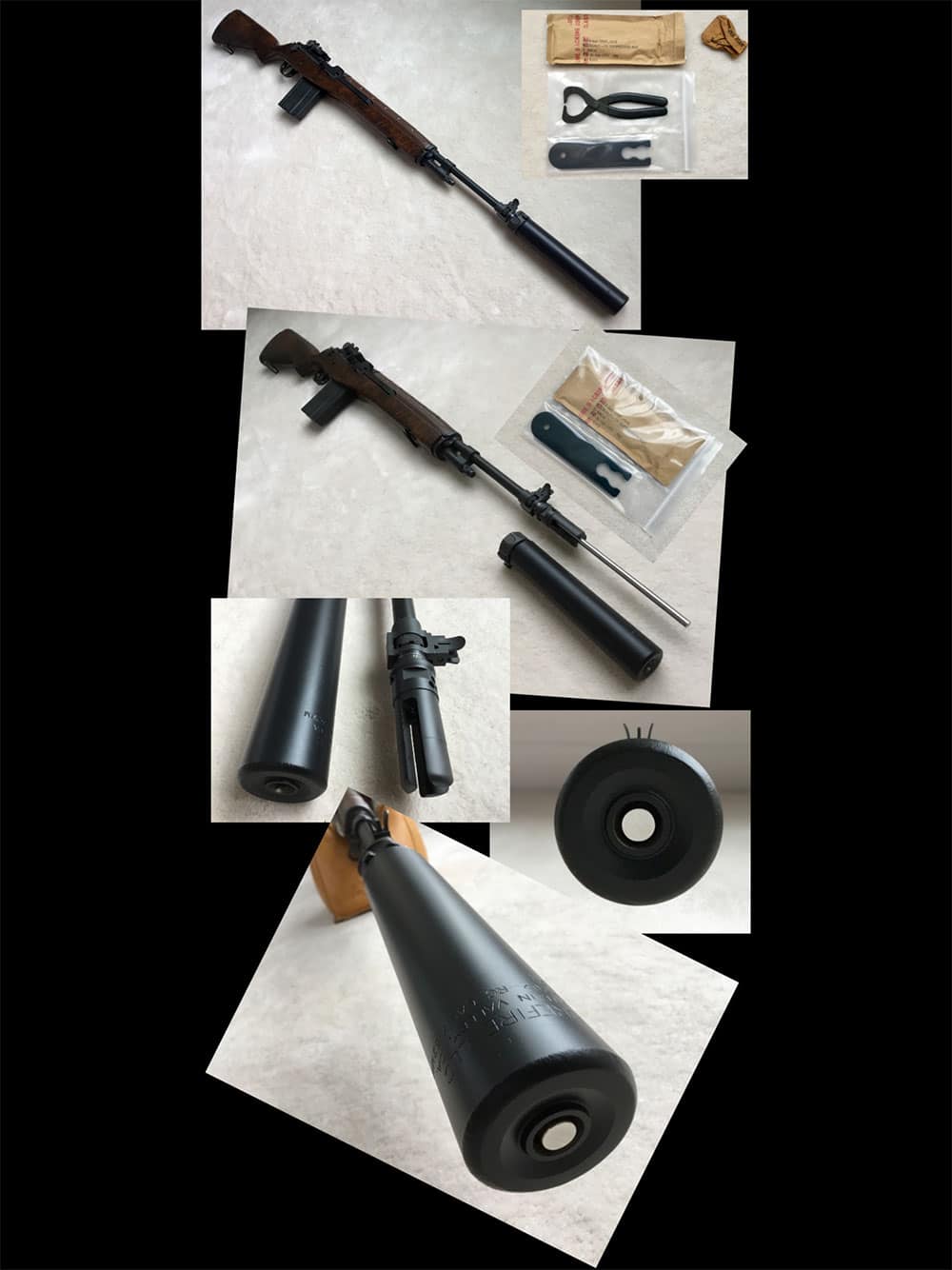 I am thinking about getting a James River armory M- 14. I don’t know which would be better to suppress! The shorter version ( paratrooper / Scout ) or the standard? I assume it all has to do with weight or personal preference ! Damn, there are so many cans out there! How to figure out which can to get, when it comes to dB is the higher number better or the lower number?
Help !!!

Just a heads up, but the OSS suppressor actually is quieter on this gun than a traditional can. I have thunderbeast on all my bolt guns so I thought I would try one on the EBR… terrible idea, blowback and noise was unexaptable. Then tried the El 762 OSS and it’s way quieter than the thunderbeast plus no extra gas. You might want to put hands on one to see for yourself. But I would say it’s close to 10 decibels quiter at the ear than the traditional can.

Did you have to modify the gas system to use the OSS on your M1A?

@Mike c, Someone will get back to you on it. This is a terrific site, populated by many knowledgeable, serious and thoughtful persons. And like most everybody else, this is not the only thing that demands their attention. Patients, brother, patients.

do you have a tutorial about the rails you added to your M1A stock?

M1A super match. do not want to move front sight, want to use scope mount that uses stripper clip guide space to hold scope better. full auto slip on muzzle brake fits around flash suppressor and is anchored to bayonet lug. any ideas on suppressing rifle?

I have a scoped m1a (not the scout). What do you recommend I do to accept a suppressor. Is the barrel on the m1a threaded 5/8 x24

.595-32 is the M14/M1A barrel thread pitch. You can adapt it to 5/8 x 24 and keep your front sight as a backup by grabbing the Delta P, SEI, or YHM adapter. Alternatively, you can use the SEI gas block sight base and use the .595 threading, but this isn’t as good in my view. You’ll need castle nut pliers, an allen/hex key (for the set screw), and likely a rubber mallet. Swap your front sight assembly for an adaptor, add a sight, and then either thread the suppressor on or pick a suppressor/QD muzzle device pairing that you like.

Hello Conner
I have M1A Socom II I am older guy and not computer savvy, well enough to get me in trouble

I saw your video and it was great tried to take pictures but no luck getting full info. I want to convert my rifle exactly as you did.

I need part numbers and phone numbers, I am dumb, please help me.
Kevin
[email protected]