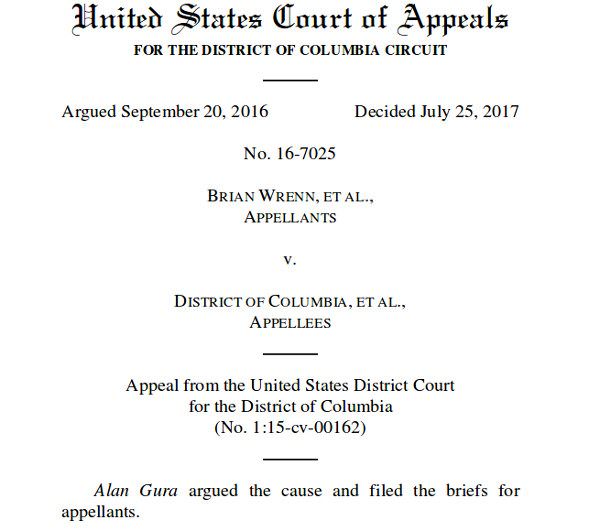 Arizona -(Ammoland.com)- A three judge panel on the D.C. Court of Appeals has struck down the District of Columbia “may issue” concealed carry law.

The District of Columbia bans the open carry of firearms. With its law banning the concealed carry of firearms except in exceptionally rare cases, it has effectively banned the carry of weapons outside the home.

The three judge panel of the D.C. Court of Appeals ruled the law to be an unconstitutional infringement on the right to bear arms.

D.C. requires gun owners to have a “good reason” to obtain a concealed carry permit.

The U.S. Court of Appeals for the D.C. Circuit struck down the regulation as too restrictive in a 2-1 decision, The Washington Post reported.

“The good-reason law is necessarily a total ban on most D.C. residents’ right to carry a gun in the face of ordinary self-defense needs,” Judge Thomas B. Griffith wrote, according to the paper.

“Bans on the ability of most citizens to exercise an enumerated right would have to flunk any judicial test.”

This reading finds support in parts of Heller I that speak louder than the Court’s aside about where the need for guns is “most acute.” That remark appears when Heller I turns to the particular ban on possession at issue there. By then the Court has spent over fifty pages giving independent and seemingly equal treatments to the right to “keep” and to “bear,” first defining those “phrases” and then teasing out their implications. See id. at 570-628. In that long preliminary analysis, the Court elaborates that to “bear” means to “‘wear, bear, or carry . . . upon the person or in the clothing or in a pocket, for the purpose . . . of being armed and ready for offensive or defensive action in a case of conflict with another person.’” Id. at 584 (quoting Muscarello v. United States, 524 U.S. 125, 143 (1998) (Ginsburg, J., dissenting)). That definition shows that the Amendment’s core must span, in the Court’s own words, the “right to possess and carry weapons in case of confrontation.” Id. at 592 (emphasis added).

From the examples of Peruta in the Ninth Circuit, the Maryland ban on “assault weapons” in the Fourth Circuit, and the 11th Circuit decision to uphold the chilling of Second Amendment rights by doctors as agents of the government,  I expect the District of Columbia will ask for an en banc ruling from the entire D.C. appeals court.

If the court refuses to grant the en banc request, or if the case is heard en banc, and if the D.C. circuit upholds the three judge panel, the case will be appealed to the Supreme Court.

My concern is even if this goes to the Supreme Court and SCOTUS knocks down this “may issue” nonsense, all these gun restrictive states like NY, Calif, Maryland, NJ, CT, etc… will just turn around and give the middle finger to SCOTUS and dare any concealed carry holder from another state to cross over into their state to see what happens. How exactly could it be enforced, if there are localities who will have law enforcement protesting against it locking people up anyway? Following same-sex marriage rulings in the past, there were clerks that resisted the decision who refused to… Read more »

“The court stated, is not whether a few select people could exercise the right but whether it was available to responsible, law-abiding people in ordinary circumstances. Because the court found that D.C.’s ‘good’ or ‘proper’ reason requirement was effectively a ban on bearing arms by people entitled to Second Amendment protection, it declared the requirement invalid and barred its enforcement.”

Uh! Los Angeles County and other California counties have this sham “may issue” system ever since I purchased my first handgun in the mid 80s.

It’s been a lifetime seeing this move through the courts.

I live in Sacramento County an the Sheriff here has certain DemocRATic legislators upset because gives out CCWs without begging if you meet his standards, not like some other County Sheriffs do. The Sheriff will pull a CCW just as quick. There are lots of good Sheriffs but there are those who leave a lot to be desired.

Obamanation was and is pathetic, his pick of judges pretty pathetic too.

I am not optimistic that the full District Court will uphold the en banc decision, given the stacking of the court with liberal judges by Obama.