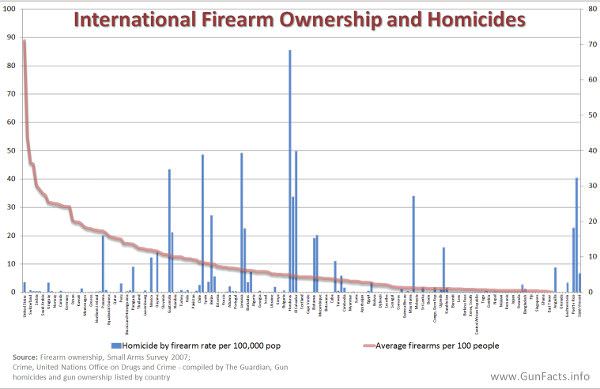 Arizona -(Ammoland.com)- The data for the graphic above was taken from the Guardian, a leftwing publication in England. Firearm ownership rates are from the Small Arms Survey in 2007, so it is a bit dated. The per capita ownership in the United States has gone up considerably since then.

It is now about 120 firearms per 100 people. U.S. citizens purchased 94 million firearms during the Obama presidency. They have likely purchased another 6 million in the first 8 months of 2017.

It varies from zero to a high near 80 per 100,000. There was only a small negative correlation, of -.137. That is not a strong correlation. It shows that the homicide rate tends to fall a bit with higher firearms ownership.  It is not statistically significant.

It does not show causation. There could be many other factors involved. For example, the rise in firearms homicides in the United States in 2015 is likely correlated with the Ferguson Effect. Several large cities have essentially withdrawn active policing from urban crime centers because of accusations of racism.

Homicides have sharply risen in those areas.  Another reason is general prosperity. Places where there is the rule of law usually have higher prosperity and higher legal firearm ownership rates. Both are associated with lower homicide rates.

The slight negative correlation between firearms ownership and homicides confirms observations made after reading most of the literature on the subject. The rate of firearms ownership has little to do with the overall homicide rate.

If there is a relationship, a higher legal firearms ownership rate means slightly less crime.

But if you are calculating statistics concerning total homicides vs firearm homicides…..how can you assume that the homicides committed with firearms would not have been committed at all had the killer not had a gun? Who can guarantee that the killer would not have simply stabbed, poisoned, ran over with a car, strangled, etc. if he had no access to a firearm? One doesn’t have to use a gun to kill people. Murderers will kill….guns or not. I can’t side with statistics…..there’s too much human error involved throughout the entire calculation. But I do agree anyway (not because of the… Read more »

@neesee, An excellent point. Murder predates firearms. Heck, there was no firearms around when Cain slew Abel.

Graphical data is useless if it is unable to be properly interpreted.

Statistics like that? …Who came up with them? Who can read them correctly? FBI statistics are clear & to the point, homicides/rapes/robberies in a specific geographical area period. ..

Any intelligent person knows if someone wants to kill you, they do not need a gun to do so. I firmly believe a bad guy with a gun, can only be stopped by a good guy with a gun.

Self preservation of one’s self & family is the Law of Nature & Man. Guns are not evil, it’s the evil behind the gun.

There needs to be a chart showing city and states where homicides occurred also it would help to have if the firearm used was stolen or not, that may tell a better story.

Can you say urban centers & Section 8 housing? I knew you could.

If you take out the big Democrat cities, America has an extraordinarily low homicide rate.

Good one Joe !!! And it is “THE TRUTH”….Liberals hate Truth, Logic, Research, & intelligence…

do you have a link to a bigger version of the first chart, it is too small to read

http://www.gunfacts.info or
Gun homicides and gun ownership listed by country – The Guardian
https://www.theguardian.com › News › US gun control
Jul 22, 2012 – Where are the world’s guns – and which countries have the highest rates of firearms murders? … The Small Arms Survey is also useful – although it is from 2007, it collates civilian gun ownership rates for 178 countries around the world, and has ‘normalised’ the data to include .