by Travis Pike
CAA Micro Roni Pistol Carbine Conversion kit can convert Glock pistols into “Glock Carbines.”  The Command Arms Accessories Micro Roni takes your Glock pistol and attaches a stock and forearm for enhanced ergonomics.  WARNING: Without a barrel extension this conversion can make the item subject to NFA and state regulations.

This is the one question you’ll see in the comments section of any announcement, review, or press release regarding a pistol caliber carbine. This time I’m happy to say yes, it does take Glock magazines. In fact, it takes Glocks, like whole Glocks, pistol, magazine and everything.

Most of us are already familiar with Command Arms Accessories ( CAA ) and their tactical gear, and without a doubt, a few of us have even seen the Roni kits they produce for a variety of different firearms. If you aren’t familiar with the concept, it’s mostly a carbine conversion kit that transforms your Glock pistol into a rifle. The Roni’s are designed to be a drop in design that requires zero modification to your Glock handgun to work. Just slide the pistol into the kit, lock it in place and you are ready to go.

That sounds great, the Roni kits are intuitive, but American gun laws are not. Traditionally the conversion from a handgun to rifle is fine, as long as the weapon’s barrel is over 16 inches. As we all know the Glock’s barrel is not 16 inches, so you are left with two options.

So now we know what exactly I had to do to make this entire set up legal without having to go the laborious NFA route. Now we can talk about the Micro Roni Kit itself.

The Micro Roni is a sweet little conversion kit that is ergonomic and well made. The Roni kit features a full-length top Picatinny rail for sights and optics. There are two side rails for flashlights and other accessories. Beneath the barrel is a removable insert that can be replaced with an actual weapon light from CAA.

The Micro Roni also features an integrated forward grip that also has the ability to house an additional magazine.

The stock is thin, light and folds easily; it also locks into place when folded and offers enough clearance to allow you to fire the gun with the stock folded. The Roni replaces most controls on the Glock except for the magazine release. You have a means to lock and unlock the slide, and rack the gun.

The racking devices attach to the top of the Glock 17 and give you an ambidextrous means to rack the gun. The ejection port is also generous and allows more than enough clearance for rounds to eject and for you to clear malfunctions.

Ergonomics overall is top notch. The most complicated process is learning how to use the slide lock and release appropriately.

To lock the slide rearward you have to press in and then up. It’s impossible to do while keeping your hand on the grip.

The overall length of the gun is about the same as most pistol caliber rifles and tends to be an inch or so shorter than most guns.

Roni Conversion Kit In Use

It’s not a surprise that as a rifle the pistol is easier to use. The kit increases your overall effective range, improves control, and gives you a whole more effective weapon platform. With the Micro Roni and IGB barrel installed I backed off for 75 yards and hit a 21-inch tall steel popper like it was next to me. This was with a Meopta Meosight 3 Red Dot installed, but the kit does most of the work. The three points of contact, the longer barrel, and red dot make it easy to reach out and touch a target.

My one reliability issue was related to a single magazine from ETS. When it was fully loaded, the weapon would fail to eject the first two to three rounds. I have multiple Elite Tactical Systems magazines, and the rest functioned flawlessly, as did magazines from Magpul and Glock OEM mags. I thought the gun would prefer a more substantial 124 grain round, but the 115 grain Winchester White Box didn’t give me any issues.

The magazine stored in the forward grip did give me a rapid reload, but that took some training to accomplish. Not that it was hard to do, but muscle memory had me constantly reaching for my belt instead of the forward grip.

Shooting a Glock equipped with the Micro Roni is an enjoyable experience. The recoil is nil, and the gun is superbly lightweight. I own revolvers heavier than this setup. With the stock folded, it’s possible to fire the configuration like it’s still a handgun.

I set up several malfunctions using Snap Caps and brass casings to see if there would be an issued clearing malfunctions. While the massive ejection port is excellent, the main issue I had was trying to lock the slide to the rear while keeping the gun in my shoulder and focusing on my target. The width of the system makes it hard to press the slide upwards while holding the slide to the rear.

That’s my biggest complaint with the system. Trying to clear complicated malfunctions isn’t the most natural thing to do. Other than that I found the system to be intuitive, easy to use, and a lot of fun to shoot. I haven’t taken my Glock out of it in months, and I don’t miss it.

So instead of just looking for a pistol caliber carbine that takes Glock mags, consider only using your Glock.

Travis Pike is a former Marine Machine gunner who served with 2nd Bn 2nd Marines for 5 years. He deployed in 2009 to Afghanistan and again in 2011 with the 22nd MEU(SOC) during a record setting 11 months at sea. He’s trained with the Romanian Army, the Spanish Marines, the Emirate Marines and the Afghan National Army. He serves as an NRA certified pistol instructor and teaches basic and defensive pistol classes. 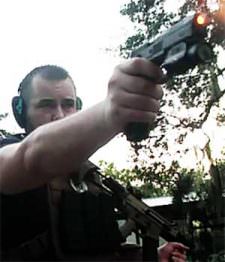 This is nothing new. There was a company at a Gun Show several years ago that had a carbine conversion for either a Glock or 1911 frame. The frame snaped into the assembly and had a 16″ barrel. The assembly was Steel not plastic. It cost a couple of hundred dollars. Accessories were also available.

Why don’t they just make this with a stock with an arm brace and then it would be legal without a stamp because it would still be a pistol. Do that and I’ll buy one!

They literally have that… It was made first…

Why not simply buy a carbine?

Carbine will weigh more then the RONI. The Roni is fun to shoot, so is my Beretta 9mm CX4 Storm carbine.

Is it legal in California?

Well, it uses magazines and looks really scary, so I would say probably not.

Seems to me the product could have avoided NFA considerations by including a SIG-brace type of attachment in back rather than an actual shoulder stock.

You are so right Hank. I called them to ask if a brace could be used to replace the straight stock and they said that they hadn’t even considered that. If they hope to sell any of these, the Sig type brace should have been in the original design of this product! Oh Well!

Just took another look at the configuration . . . if they put on a brace so it would remain a pistol, the “integrated forward grip that also has the ability to house an additional magazine” means you’d still have a regulatory issue, as the BATmen classify a pistol with a forward grip as an AOW – Any Other Weapon – so you’d still have additional paperwork to stay legal.

The Roni STAB has the brace so no NFA issues to deal with.