U.S.A. –-(AmmoLand.com)- Early reports are getting out. The mass killer suspect in Boulder Colorado, has been named as Ahmad Al Issa.  The Twitter account associated with Ahmad Al Issa shows a strong dislike of President Trump.

It has been reported the murder suspect planned attacks against Trump rallies, considered the Republican HQ, but was thwarted when a rally was canceled due to Covid 19. There has been no information as to why the Boulder grocery store was targeted.

Early information from a national security agency suggests Boulder shooter planned to target the Trump rally in Colorado Springs, Feb 2020, but decided to wait until the next one on March 13 in Denver but it was cancelled due to COVID, per WH official 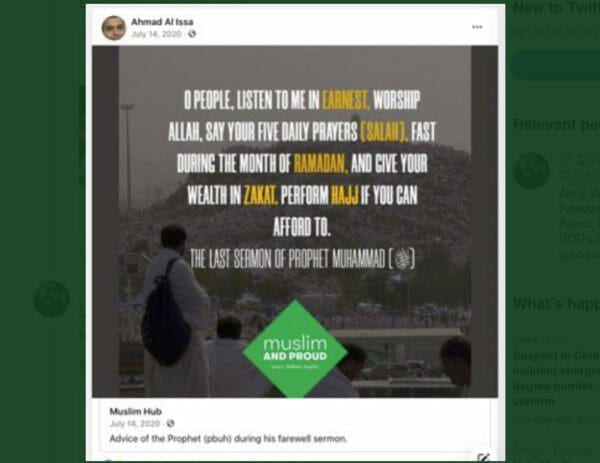 Similar to typical Islamic terrorists, the murder suspect was in favor of mass immigration into the United States.

“Obviously this is a very complex investigation that will take no less than 5 days to complete,” said Herold.

“We do have a person of interest in custody. That person was injured during the incident and that person is being treated for injuries,” said Boulder Police Cmdr. Kerry Yamaguchi.

Herold said the suspect had a “patrol rifle.”

Ahmad Al Aliwi Alissa purchased a Ruger AR-556 pistol on March 16 — six days before going on a deadly rampage at the King Soopers in Boulder, according to an affidavit unsealed Tuesday.

More information will be coming out shortly. The mass killing has already been used as an excuse to justify more infringements on Second Amendment rights in the United States.

The excuse may backfire if more information about a terrorist connection starts coming out.

Typically, after terrorist attacks, there is a surge of support for the Second Amendment. The level of demand for guns and ammunition is already at historically high levels. This attack will only add to the demand.