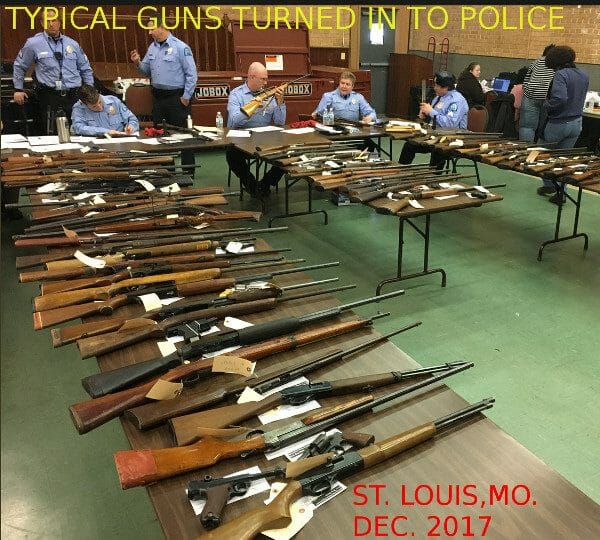 U.S.A. –-(AmmoLand.com)- There will be a gun turn-in event on Saturday, May, 15th 2021 in Canton, Ohio. While these events are commonly labeled with the propaganda term “buyback” the guns were never owned by the people attempting to buy them.

The gift cards are said to be for Walmart. There are few working firearms that are worth less than $100. The group hopes to collect 200, which would indicate about $20,000 available. The structure of the event has been designed to make private purchases of the guns being brought in difficult.

From an earlier story:

If you participate, here’s what to expect:

I was at a similar event in Phoenix, Arizona. It turned into a rolling gun show.

The gift cards tend to run out quickly. People who bring guns to the event after the gift cards run out are usually willing to deal with a cash offer.  This correspondent obtained some very nice, if inexpensive guns when this occurred in Phoenix.

Some Police are hostile to private buyers, others are indifferent or positive. Do some research before setting up a table and holding up a sign saying with “Cash for Guns” sign.

Police are not always knowledgeable about gun laws, so it is good to have a copy of the statutes to show them. It is necessary to know where you can legally park, walk, or stand to set up to examine guns and make offers.

Private sales are legal in Ohio.

This action serves many useful purposes. It stretches the turn-in budget so that more guns can be taken off the street. It helps keep fearful widows from being defrauded of most of the market value of the gun they are turning in. It prevents valuable assets from being destroyed by bureaucratic inflexibility. It is a win-win-win situation.

Open carry is legal in Ohio. No permit is necessary.

The author and AmmoLand do not offer legal advice. Research laws yourself, so you know what your rights are. Much can be learned from the experience of others. There have been several turn-in (buyback) events in Ohio over the years.

Here is a link to a previous article about a gun turn-in event in Cleveland and how private purchasers handled the situation there.

I’m kind of confused on this people are selling the police guns that they will need in the near future?

Often “operable” is a stretch when applied to turned in guns. Many sellers are simply using opportunity to trade up. Not that $100 get’s you far in today’s market.

I’d be afraid, LaTerdveeous just sold me the gun, he shot that night clerk at da Liqua Sto with lass week.

READ CAREFULLY, All Guns Must be Transported in the Trunk of Your Car, Stay In Your Vehicle A “Volunteer” Will Take A Picture of Your Car’s Licensee Plate Number Retrieve the Firearm and bring You Your “Gift Card” Probably Taking Another Picture of You. You Think Maybe You’re Not Being ‘Tracked” Better Think Again.

It’s a proven fact that law enforcement has been caught driving through gun show parking lots and taking pictures of as well as tracking license plates. When they were busted doing that, they moved to the parking lots across the streets.

“Ignorance of the law is no excuse BOY!”

What does APG stand for?

In fairness it’s literally impossible to know all the laws or even most of them. You memorize the most commonly dealt with laws and in my day you always carried a copy of statuates in your cruiser for reference. Just like your doctor’s knowledge base is extremely limited and they have to reference their books (likely computers these days) before making a diagnosis.

Beo – yep back in the day I carried (at least) a ‘cliff’s note’ version of traffic and criminal statutes. I could always look up the entire statute back at the station. Now a street copper can have a whole law library on a compact electronic device that fits in a shirt pocket. And likely has intrawebz access via the computer in the squad car for the latest legal updates.

the majority of police do what they are told to do like worker ants ,not a thought in their empty heads , many of the ones that think are crooked as the day is long and look for ways to sidestep laws in grey areas to railroad people for whatever reason;; now and then you find one that is In it to better the world great to work with but far to few

Lived in North Canton for 3 1/2 long years. Take more than a cheap/junk/hot gun to get me back there. No thank you very much.