NEW YORK CITY -(Ammoland.com)- In a letter provided to AmmoLand News from Gun Owners of America (GOA), dated August 31, 2022, Inspector Hugh Bogle of the New York Police Department (NYPD) informed business owners with an active business, limited carry, special carry, or carry business license that their business might now be in a “sensitive area” and were informed to bring their guns to the police station so that the guns can be “safeguarded,” or remove them from the location.

The letter reads: “If this applies to your place of business, please bring your applicable firearm(s) to your local precinct in order for it to be safeguarded for you. Alternatively, you may bring your firearm(s) to another location where you are lawfully allowed to possess and store it. Lastly, you may contract with a Federally Licensed Firearms dealer (FFL) to store the firearm(s) for you – they may, however, charge for this service.” 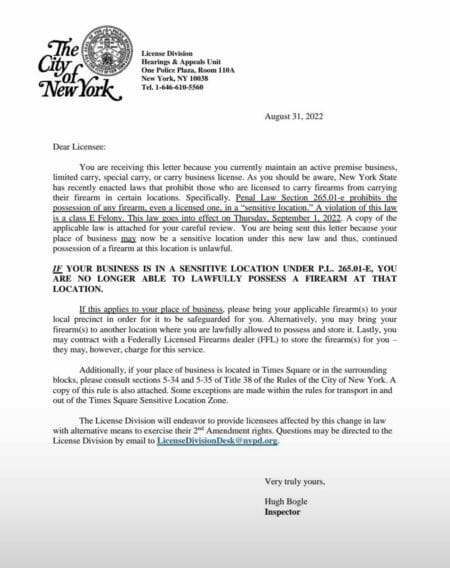 After the landmark Bruen Supreme Court decision, New York passed the Concealed Carry Improvement Act (CCIA). The new law designated much of the State as a “sensitive area.” That designation included much of New York City. Any place that serves alcohol, provides any type of medical or counseling services, State-owned buildings, parks, recreation centers, all of Time Square, and many other places are now sensitive areas. The new law turned law-abiding citizens into criminals in the eyes of the police if they wished to continue to exercise their Constitutionally protected right to bear arms.

Many businesses in the area surrounding Time Square will automatically become sensitive areas regardless of the type of business. Some people fear this will lead to higher crime because of the number of cash businesses and jewelry stores in the area that criminals will now target. People fear these stores will now be soft targets. The State claims that the CCIA will make residents safer, but it is putting a target on the backs of these business owners.

The NYPD seems to be all too happy to enforce the Constitutionally dubious law. Leaked documents obtained by Project Veritas showed the NYPD would assume anyone carrying a firearm is carrying that gun unlawfully until proven otherwise. This assumption of guilt also seems to run afoul of probable cause since the police will use the fact that someone is carrying a gun as probable cause to arrest and search them regardless of if they legally possess the firearm. The new letter shows another example of the NYPD aggressively enforcing the CCIA.

Another thing is that the letter might prove the old adage that registration leads to confiscation. For years, gun rights advocates have claimed that confiscation is the end goal of any registration scheme. Anti-gun groups have told us those gun registrations have nothing to do with firearms confiscation plans, but many see the letters sent to New York City business owners as confiscation notices. Even though the business owners have two other choices if they do not want to turn over their firearms to the police, many don’t have another place to take their firearms. Most firearms dealers will not store guns for customers, eliminating the third option for gun owners.

This confiscation scheme has only been announced for New York City but could spread to the rest of the Empire State. It is also a cautionary tale about how anti-gun politicians can and will use firearms registrations to disarm their residents. It has happened in Australia. It has happened in the UK. It has happened in Canada. And now it is happening in the Big Apple.

Are they serious?“…please bring your applicable firearm(s) to your local precinct in order for it to be safeguarded for you.” I’ve seen how police arms rooms “safeguard” non-departmental weapons; no thank you very much. And what happens when you go to your friendly NYPD police station to retrieve your firearms? They will undoubtedly ask if your business is still in a “sensitive location,” and if it is get ready for a denial. Smells like confiscation to me. All these dumb shits need to go, and the only way to do it is vote them the hell out! Make sure you’re… Read more »

What do we do when this election is rigged as well?

I was born during the day, but not yesterday.
Do they really think we are as dumb as they are?

Last edited 16 days ago by Cruiser
5

No. It’s their followers that they think (know/counting on) as being dumb.

they hope we are dumb…if we dont speak up and and fight we are stupid…rights are not privelages and sometimes need to be defended , the left wants to play dirty and sling mud….why were the teachers not armed and trained to protect, why is there not at least 1 level 4 rated desk in every classroom that could be used to block door to safely keep an active shooter out counter every thing they say with a real practical solution

This will be as effective as the Gun Free Zone signs.

Last one out don’t bother to close the lights. The homeless might appreciate being able to see in the dark.

Firearm buisness owners in New should say FU-Q to Hugh Bogle and tell him to surrender his firearms to them . Does the idiot understand how we became a free country ? The Britts got the picture . Hand Hugh an American history book please . Bookmark the section about independence day for the idiot .

The March towards Civil War continues, its pace quickens.

It’s a matter of public safety that they must comply to the masonic kabbalah long noses and be good law abiding boot lickers because that is the law.

I bet they miss the days when Cuomo was king and spewing all his not so secret freemason codes on their screens.

You must have stepped on a few toes!
😀

I thought Cuomo is Catholic. Wouldn’t that be Knights of Columbus?

Same difference, both are patrons of the Illuminati.. I guess… or so I’m told…by a Black Jew… Ain’t that true?

the enlightened is a different group and has people hidden in every large group even with best filters some slip by ,they may be who is running fbi and doj because it sure as hell isnt anyone that believes in freedom ,and would have written bill of rights

I use the translation so people open their eyes and see whoever is leading progressives is from this group, they believe in destroying past to build their version of the future

Why come is it you get downvoted for making simple statements…? I guess I do too…

Do you have a .220 Swift? Is that where the name comes from?

I used to have a friend, and his ‘company’ was called Swift Water Farms…he raised racing horses…he had horses in every state of the country…

He was also a first-rate cook…ahem…if you know what I’m saying… He’s dead now though… through a “farming” accident..

I always used to think that was such a cool name he had for his organization..

the lines of no Catholics in freemasons and no jews is gone like the rules on miami beach and cape cod so he could be a mason, I do not have the lines of communication from within the group I had when I was younger (had several members of family that were heads of lodges or higher, so I do know what is bs and what is true) some of the lodges are pro 2a to point of being a militia, they have a large number of military officers (I think alan west may belong ,met him and the ring… Read more »

swmft… Can you say bush

that whole family is trash,like bidens
some people should never have any kind of power not even the remote for the tv

Last edited 14 days ago by swmft
-1
AmmolandTV
View All
Editor’s Pick
Recent Comments
wpDiscuz
We use cookies on our website to give you the most relevant experience by remembering your preferences and repeat visits. By clicking “Accept All”, you consent to the use of ALL the cookies. However, you may visit "Cookie Settings" to provide a controlled consent.
Cookie SettingsAccept All
Read More
Manage consent