USA – -(AmmoLand.com)- Apparently, New York State is not very happy with the fact that the court system keeps shooting down their unconstitutional gun laws. So, the anti-gun Empire State has decided in Nassau County to send out letters to new concealed carry permit holders reminding them of the firearm storage laws within the state and demanding that they abide by them.

The letter starts off with a warning that the dangerous or what they call “responsible” firearm storage is the law in New York State. Typical intimidation, but what else would you expect? The letter tells gun owners that their firearms must be stored with a gun-locking device or in a safe while in the home. It goes on to say that firearms should be stored by removing the ammunition from and securely locking such firearms in a location separate from the ammunition. 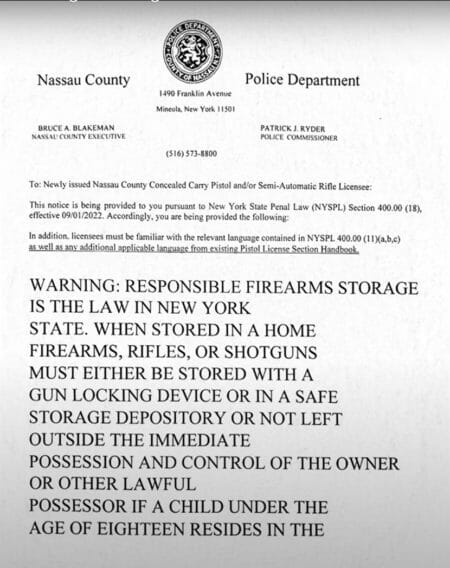 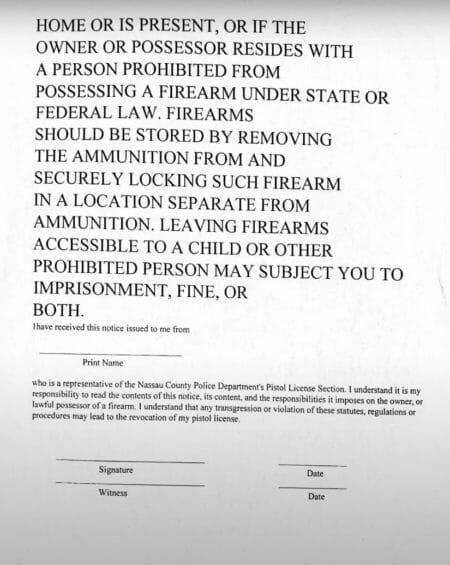 Not only is this a dangerous idea by making firearms impossible to use in a self-defense situation, but it makes everyone in the house vulnerable to attacks by intentionally making them unarmed and helpless. This only makes it clearer that the New York State legislature must be intent on creating a victim/predator society in New York. Why else would you let prisoners out of jail and loose on the streets while simultaneously removing the ability of New York citizens to defend themselves in their own homes? Are they protecting the criminals? Is that the goal here? Because that’s what this type of requirement does.

What good is a gun if you can’t use it?

I know it sounds ridiculous, but rules like this would only lead you to believe that these anti-gun policymakers don’t understand this. But don’t fool yourself. They’re not stupid. They understand that a gun locked away in a safe with its ammunition locked away in another safe is essentially unusable.

Not only does this policy make people unsafe in their own homes, but the letter also appears to be an attempt to get gun owners to subject themselves to the forfeiture of their Second Amendment rights because the Nassau County Police Department is requiring that gun owners sign this dangerous policy. By doing so, people are saying that they “understand that any transgression or violation of the statutes, regulations, or procedures may lead to the revocation of my pistol license.” You see, the Supreme Court told them several times that what they are doing is unconstitutional. Now, it seems, they are resorting to coercing gun owners to willfully give up their second amendment right by signing unconstitutional documents. Maybe they think that they can keep these documents on file and later use them against the gun owners as a way of revoking their pistol permits. Many New Yorkers are telling the State to go straight to hell and that they will do what they want in their own homes.

The 2nd Amendment is not a privilege. It’s your right.

Dan Wos is a nationally recognized 2nd Amendment advocate, Host of The Loaded Mic, and Author of the “GOOD GUN BAD GUY” book series. He speaks at events, is a contributing writer for many publications, and can be found on radio stations across the country. Dan has been a guest on the Sean Hannity Show, Real America’s Voice, and several others. Speaking on behalf of gun rights, Dan exposes the strategies of the anti-gun crowd and explains their mission to disarm law-abiding American gun owners.

I’m sure thugs will appreciate the assistance from the government slowing down their victims response.

I for one would love to see the numbers in compliance with this stupidity. THEN there would be a clear case of mental instability to deny them a firearm transfer.

Write back: “I am disinclined to acquiesce to your request at this or any other time, as it is unconstitutional per Heller and represents the height of stupidity, as it would prevent me from defending my home and family. Suck a big bag of phalluses.”

wasn’t this rule or law ruled unconstitutional when Washington DC tried this nonsense over a decade ago?

I’d have to wipe my ass with it & send it back.

There are a lot of CPAs in New York – Criminal Protection Acts.

I believe the SCOTUS has already ruled that safe storage laws are unconstitutional.

Last edited 23 days ago by Ledesma
6

they should be lined up and shot, would solve a lot of problems

Only now have I realized that the nickname “Empire State” should refer to the evil Empire in Star Wars.

is this being mailed to all licensees or hand delivered, because of the bottom paragraph? either way it is a huge waste of taxpayer funds. i am surprised they don’t want it notarized also.
if we look at this with strict scrutiny and historical context, as per nyspra case law, this is unenforceable because there has never before been regulations demanding this dangerous practice.
leftists gonna do what leftists do.

I believe that Arny has the proper Notarization.

the police sending this should be arrested and sent to levenworth

So NY State is accepting liability for injuries and deaths that occur during home invasions, right? Asking for a friend.

I propose a new law for NY. Since “we all know” that EV fires from their lithium batteries are becoming more common, all electric vehicles must be stored in a locked garage and their batteries removed and stored in a separate locked fire resistant building when not in use or being recharged. The keys/fobs to unlock and start these vehicles must be locked in a secure safe or lockbox if any children or consumers of alcoholic beverages are present on the property or within 100 feet of said property. There…….”common sense fire prevention”. (This nonsense approved by 1 out of… Read more »

NY, are you nuts?

No. l will NOT compIy.

Unfortunately, I live in Newyorkistan. I will not comply

Unfortunately they can tie you up in court and drain your bank with these Gestapo enforced laws. Even if somehow you succeed in we inning a case against this type of law, you will be broke and spend years in the gulag like the Jan 6 folks.

My suggestion, move to a better state.

Absolute caca de toro! Yet another flagrant violation of constitutional law. When are we going to take action to hold these morons accountable and bring them up on federal charges? Until that happen they will continue to piddle with our rights virtually unchallenged.

Nassau County Police, Suffolk County Police and Westchester County Police Departments should be abolished. Cities have police departments, counties have sheriff departments and the Sherriff is elected by the People and the Sheriff is beholden to the People. This happened sometime in the early 1960’s…just because New York City had a police department? They take an oath to uphold the Constitution but any time the Politicians tell them to do something unconstitutional to the People they do it. They are beholden to the Democrat Establishment that feeds them an exorbitant salary. The Democrat Executives don’t even ask the State back… Read more »

Between expanded restricted areas for concealed carry and restricted access within one’s home, handguns are effectively banned for law-abiding civilians. A NYS concealed carry license, in reality, is just a fancy piece of paper, for which the applicant spent a lot of money and divulged lots of private information. Since Democrats have a super majority in Albany and Kathy “Crimewave” Hochul has just been elected to a full four year term, don’t expect much relief from these overbearing regulations.

scotus needs a straight a right is a right ruling , no government restraints can be added, this kills the interstate sale shit, then good luck there would be millions of sales from other states