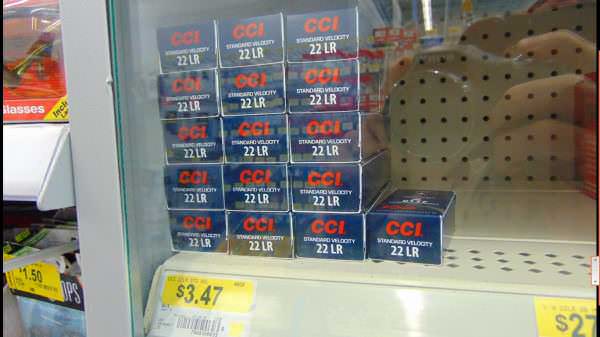 Arizona – -(Ammoland.com)-  The  presence of .22 rimfire at Wal-Mart has been uncommon for three years now.  When President Obama pushed for more infringements on the Second Amendment, starting in 2013, the demand for .22 rimfire skyrocketed.  Instead of raising prices on the ammunition sufficiently to bring demand down to reasonable levels, manufacturers tried to keep prices stable to earn customer good will.  It failed as a strategy.  With the demand so high, less public entrepreneurs purchased all the .22 they could obtain, then offered it over the Internet, at gun shows, and other venues, at three to four times the price purchased.  The producers stayed with their artificially low price policy, and the middlemen made money.

If the producers had raised prices, the money would have gone to them, and there would have been no reason not to increase production, which would have satisfied demand, and lead to lower prices again.

Gradually, producers did raise prices, though far below what the market would bear. In 2016, producers have purchased and put into production the expensive machinery needed to increase the output of .22 rimfire.

Those are serious numbers, over a billion more .22 rimfire a year, with serious investment behind it.

The cartridges were observed at the Wal-Mart on the corner of Marsh Lane and Frankfort in North Dallas.

Today, I checked back.  The supply had dwindled to a dozen boxes of Standard Velocity, but it was still on the shelves.

Another customer was looking while I was there.  I mentioned the .22 to him.  He said that he wasn't interested, he wanted the bigger boxes.  I cannot say that he was a self promoted middleman, but he might have been.

A few months ago, an employee at the store said that when they received supplies of .22 in the bulk packs, they were snapped up immediately.  Wal-Mart has a three box limit on .22 rimfire to spread the supply out a bit.

Maybe we will see the 50 round boxes return to the market first.  I have started to notice .22 shot cartridges showing up in 20 round boxes.  There would be even less incentive to buy three of those boxes to take to a gun show.

Participants on other forums are also reporting a noticeable, if small, increase in the availability of .22 at Wal-Mart.   Perhaps production is finally satisfying demand.  Then again, a few phrases by Hillary Clinton could push demand to even higher levels.

I have bought my first box from a local Walmart this weekend that I have seen in over a year. They were 100 count box of Winchesters. The also seem to have put them out in the evening time.

Those idiots can camp all they want….but it really pays to know a friend in shipping and receiving….he always sets some ammo asside for me….so I dont have to camp like a freaking loser

.22LR is still being ‘camped out’ in Las Vegas Walmarts. Folks sitting in chairs taken from the garden section literally camping the store each early AM waiting for .22LR to show up. I’m up very early and often wandering into WM for gardening or auto supplies and see these guys in there every single time I go it (to any of the 7 WM that I frequent in the SE and SW Las Vegas valley). There’s always a few listings on Backpage for “3 boxes of” (Federal bulk, golden bullets, typical WM stock) going on. These guys turning the early-morning… Read more »