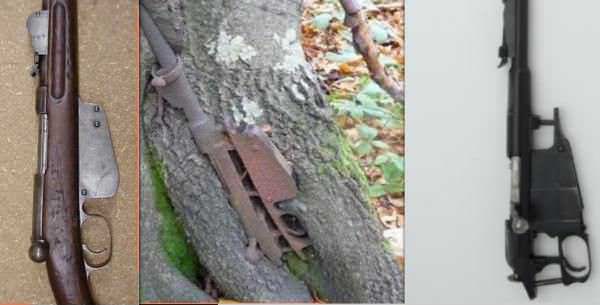 Arizona – -(Ammoland.com)- The image in the middle is a picture that is floating about on Russian social media.  It was sent to me by by a friend, who I previously wrote about, the one of the adventures with two Bushmen.  He asked me if the action bedded in the tree might be a Mosin Nagant.  A Mosin Nagant action is shown on the right.

At first glance, there are similarities, the solid magazine, the 90 degree bolt handle, the shape of the trigger… but close examination shows that this is no Mosin Nagant.  The most obvious difference is the placement of the bolt handle, at the back of the action, instead of inside the ejection port.  The magazine shape is different, the bolt handle is directly over the trigger, and the shape of the rear sight elevator is distinctive, and clearly not a Mosin Nagant.

I believe the rifle in the tree is an Austrian Mannlicher M86/88.  There is not much difference between the 1886 and 1888 models that you can tell from a photograph such as this.  The picture on the left is of a Mannlicher M86/88.  Comparing them shows the clear family traits of the rifle in the tree.  Everything matches, as much as can be easily derived from the photographs.  While not obvious from the photographs, the Mannlicher is a straight pull bolt action, while the Mosin Nagant is of the more conventional type.

It is impossible to tell when the rifle was left leaning against what appears to be an oak tree.  It was long enough ago to embed the rifle barrel rather solidly.  I suspect it was during WWII.  The location of the photograph is said to be from a Russian forest, when I found a matching image in a 2014 article in the Daily Mail. The Daily Mail article says that a reader identified the rifle as an 1891 Carcano.  That is incorrect.  The bolt handle is in the wrong place, even though the magazine and rear sight have similarities.

The picture does not show us if the rifle is an 11 mm or an 8 mm.  The 8 mm is more common.  It seems unlikely that the Germans or their allied troops would send an obsolete 11 mm rifle to the Eastern front; but it is not impossible.  As happens with  obsolete arms, they go through a phase where they are discarded and deemed worthless.  They are often sold off and/or scrapped during this period.  Later on, nostalgia comes into play, and people find how much fun it is to work the actions, load and shoot the old cartridges, and imagine what it would have been like to be an Austrian conscript on the Eastern front during the Great Patriotic war, as the Russians call it.

People of all ages use the technology they had to the best of their ability.  Examining old weapons, and understanding how and why they were constructed, gives a deep appreciation for the talents and craft of past generations.

Long ago I gave up hoping for any firearms knowledge among old media writers.  I offer my services as a firearms subject matter expert to proof these stories, for a small fee, of course.  Such proofing would improve the accuracy of their articles, and gain much needed credibility.

Even a libturd that can’t tell the difference between an “assault weapon” and a BB gun can see it is not a nagant! On second thought, NOT! But the easiest way to check is to remove the action of the Austrian M86/88 from the stock and see if it matches.

I have a Mosin and I believe you are correct it is not a mosin.