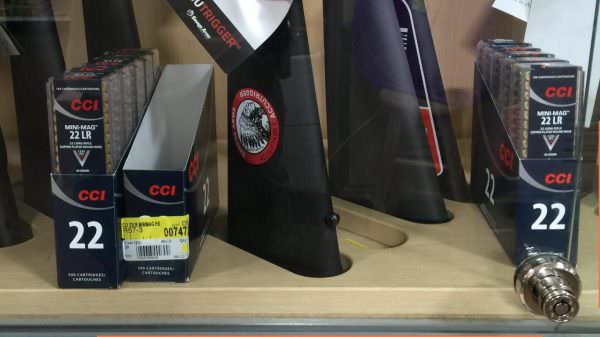 Arizona – -(Ammoland.com)- When I go to the local WalMart in Yuma (there are three), I check to see if there is any .22 ammunition.  At some point, increased production and falling demand should cross, allowing for more .22 on the shelves. At the WalMart on Frontage road, toward the Foothills, I was surprised to see .22 ammunition.  It was the first time in three years.

A perky, pretty clerk, Yittzel, was happy to answer my questions.  She was a joy to deal with, and did not have any problem with me taking pictures.  She said that they seldom saw .22 ammunition, perhaps once a month. She thought it might be coming in a little more frequently lately, but it was still uncommon.  She was surprised when she came in and found .22 ammunition on the shelves that morning.  She doubted if it would last more than  a couple of days.

A customer came up to the counter and bought 300 rounds of CCI mini-mags, the maximum allowed.  He wasn't interested in the Standard Velocity.

He asked when Yittzel went off shift, or if he could come back in 15 minutes and buy 300 more.  She told him that three boxes was the limit. I expect he came back later, when someone else was at the counter.

I asked Yittzel about ammunition availability and the effect of politics.  She agreed the ammunition bubble is driven by people's fear of potential legislation during the Obama administration.

Resellers who buy ammunition from WalMart to sell at gun shows, or over the Internet, help to keep the bubble inflated.

She said when she came to work after the Orlando shooting, most of the ammunition shelves were bare. 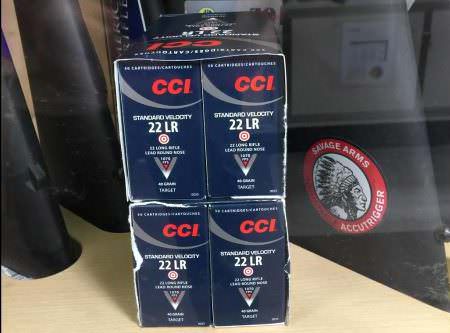 .22 ammunition manufacturers have increased production in an attempt to balance long term supply with demand.  At the Shot Show in January of this year, Aquila said that they were increasing production about 30%.  Industry sources assured me that CCI/Federal were increasing their production by 20%.  Those increases should be coming on line about now.  Those increases should bring .22 production to over 5 billion rounds each year.  Industry sources believe demand has increased with all the new shooters and firearm sales.

The machines to manufacture .22 ammunition are expensive.  Manufacturers are hesitant to invest in expensive machinery, only to have it sit idle after a bubble of demand has burst.  After three years, manufactures have decided there is a long term component to the increase in demand.

Every time it appears that production has started to meet demand, the Obama administration pushes another infringement on the Second Amendment, and demand spikes.  The House Democrats throwing a tantrum on the House floor, and demanding that American civil rights be violated, did not help.

We may have to wait until there is a Republican administration for .22 ammunition to become plentiful again.  The Democrat nominee, Hillary, is pushing harder for more Second Amendment infringements than any other nominee in history.

Still waiting for Wally World to have them in TN. They barely have .223 also. Local sporting goods stores have .22lr and .223 though at a higher price.

Midway USA, is simple, professional, and always follows up on your order. I wouldn’t call Midway, part of the dark web. Mr Larry, is not only a great American, he is a patriot, and a savvy businessman. They have become my go to for ammo, gun parts, and any accoutrements you could ever need. They are an old timey hunting and gun supply company, with a eye towards what the American shooter wants. Try them out. They will make sure your satisfaction is complete. Large orders do not phase these folks……

The local Walmart said that when 22 ammo comes in, somebody puts the word out and the resellers come in and snatch it up in a hurry. Are those underpaid Walmart workers getting a payout for these phone calls ?
State sales tax laws can often cause trouble for these resellers as they do not collect sales tax as is required by law.

Again, go to AmmoSeek.com and find all you want.

Good grief, are people still buying ammo in stores and waiting for stores to get meager stocks of it? Go online and by lots of 30,000-50,000 (that’s right, thirty to fifty thousand) rounds of 22 ammo. Or just by a couple hundred if that’s all you want. WalMart–Geez…

Go to AmmoSeek.com and find all the 22 ammo you want including CCI. The 30-50K is a foreign manufacture that has received good reviews.

Here in Missouri I think Wal Mart has stopped stocking any but all the other retailers have plenty. 22 mag is rare but available. Gun Show prices are 3 times normal retail here and most at the shows look like it is 25 years old from the looks of the boxes.

I noticed that about the boxes too. I think it’s because people are getting a little smarter and not paying their ripoff prices so they have to drag it around to lots of shows with lots of wear on the boxes. Here in central Arkansas, I can find it at Wallys about 50% of the time and local gun shops 100% of the time. Usually all competitively priced. Thanks Dons.

I don’t even really like to shoot .22 that much honestly…

I buy most all of my ammo online. I’ve rarely had a problem finding what I want and as much as I want. It can be slightly higher in cost, but when you consider time spent, driving costs, and the number of times the shelves are empty so you have to often make multiple trips, I feel like I save by ordering online.

@Hijinx I also buy all my ammo on line. I used to buy at bass pro when all the ammo was roughly the same price no matter where you bought it. I use four different calibers, and mostly 9mm. At most stores around me in Illinois its about thirteen to sixteen bucks per 50rnd box, but I did find a website that gets small quantities of brand new 115gr 9mm sellier&Belloit for 9.95 per 50rnd box. Just north of 200.00 bucks. The ammo shoots perfect, never a problem. .45acp varies from around 13.00 to 20.00 bucks depending if target or… Read more »

In the German Weimar Republic they had ‘runaway inflation’. We don’t have it in America yet, but ammunition price inflation is a sure sign that it’s coming. Happy Independence Day! Enjoy your ‘Freedom’ at least until November!

I was working a the Yuma proving grounds for a couple months earlier this year and noticed Walmart didn’t have 22. I’m working in Utah now and 22 is plentiful. Back home in Arkansas Walmart seldom has 22 but the local sporting goods store usually has a good supply at prices cheaper than can be found online. But they still have a one box limit.

Around NW Arkansas I seen very little 22LR on store shelves in most of the big box stores (ie: Walmart, Academy Sports, Cabela’s etc.) and most of the time its limited to a 1 or 2 box maximum. I’m still trying to build my stockpile of 22LR and I’ve found most of the deals are online and sometimes in the smaller gun shops.

This is unreal when I read about .22LR,.22mag ammo being so scarce around the United States. Carters Country in Houston has had .22 ammo for a long time. I bought 10 boxes of Federal .22LR 40grain 325rd boxes and I don’t even have a .22LR firearm right now. I have a Marlin 783 .22mag rifle and picked up some of that too.Mr.Weingarten said he ain’t seen none in three years and I was shocked to hear that.

Here in Yuma it is and has been like the proverbial hens teeth, Scarce or non existent for several years now. Walmart’s have lines of friends of the buyers stand in line with them and buy it up to do like the article says, hoard it or resell it later at gun shows or online in classifieds.
sad.

Guest
how much is that ammo ?

Be sure to say “thank you” to the gay socialist Seattle government for their stupid new tax on guns and ammo. Then remind them that it has raised virtually no revenue because most shooters are smart enough to realize that they are free to buy elsewhere.