“Initially, the investigation centered around Hunter Biden’s finances related to overseas business ties and consulting work,” the report explains. “Over time, investigators with multiple agencies focused closely on whether he did not report all of his income, and whether he lied on gun purchase paperwork in 2018, according to the people familiar with the situation, who spoke on the condition of anonymity to discuss an ongoing case.”

It’s important to note where the gun concerns were first raised in the media because with The Post and other “establishment news” outlets now reporting on this aspect, they will quickly become the dominant controllers of the narrative fed to the public. The fact remains, though, that while earlier reports noted the story about Hallie Biden discarding Biden’s gun in a supermarket trash bin, the first media account broaching the subject of lying on the ATF Form 4473  Firearm Transaction Record about controlled substance abuse in order to feloniously “pass” the National Instant Check System (NICS) background check was AmmoLand’s, on November 1, 2020.

The thought didn’t even occur to the “real reporters.”

Likewise, for subsequent reports on Freedom of Information Act (FOIA) requests filed with the Bureau of Alcohol, Tobacco, Firearms and Explosives (ATF) and with the Secret Service to release agency records relating to their reported investigations of the incident. And AmmoLand was the only source reporting on complaints filed against the agencies for noncompliance with the FOIA requests, culminating in an Obama-appointed federal judge’s ruling in September that Biden’s “privacy interests” outweighed the public’s right to know.

Not to put too fine a point on it, but AmmoLand has an archive of all related reports over the past two years, each one breaking new ground by adding accounts of new developments. Yet a Google “News” search shows the public will be getting what it learns about this story from the very “news” outlets that have been ignoring the gun aspect of the story until recently, with AmmoLand’s original investigative reports nowhere in sight. It’s not just that we’re being “bigfooted” out of the story—it’s being done by “news” organizations that have longstanding documented biases for Joe Biden and the Democrats and against guns (although with the entire DSM jumping on board with this, one can’t help suspect the string-pullers are signaling the Bidens are no longer useful and becoming replaceable).

Still, here’s something we didn’t uncover but WaPo did, so credit is given where due.

“Asked about the case, Chris Clark, a lawyer for Hunter Biden, accused investigators of leaking information,” The Post account continues. Note he doesn’t deny anything, he changes the subject and attacks with counteraccusations.  And what we’re left with is that Weiss may or may not decide to act.

If he decides not to, why? And will the story be forgotten?

It may once more be ignored, but forward motion is still a possibility.

First, Judicial Watch recently announced it is suing the “Secret Service for records about Hunter Biden’s gun allegedly found in a dumpster.” Unclear at this point is if they have new information leading their attorneys to deem this will be a fruitful pursuit, or if they are simply unaware that AmmoLand reported on a signed affidavit from the Secret Service denying having any records.

If they can prove the affidavit was falsely signed, that would be huge news. Alternatively, if they just didn’t know about it, that reiterates how relying on “the media” and ignoring independent investigative journalistic endeavors means important information stays trapped in niche echo chambers and away from wider public scrutiny. This correspondent reached out to Judicial Watch at the time of their report but they have not responded. 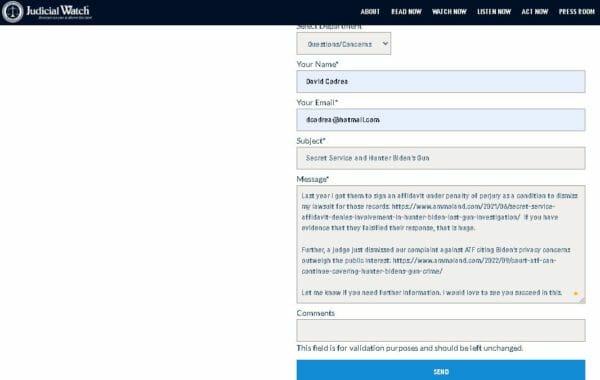 Also, even if USA Weiss elects not to pursue “gun charges,” (and AmmoLand has presented a compelling photographic evidence analysis suggesting there may have been a second felony firearm transfer violation that no one else is reporting, let alone investigating), this latest development may provide the impetus to reopen the complaint the judge’s ruling shut down. And you can thank Biden’s lawyer for the opening.

At the time of the ruling, attorney Stephen Stamboulieh advised that no appeal would be filed due to time, expense, and the unlikelihood of it succeeding. This could change that. A motion for reconsideration may now be feasible since Biden’s attorney Clark publicly acknowledged the investigation.

“We are evaluating our options with this new evidence,” Stamboulieh advises.

Per the Daily Mail:

Whether or not anything comes of this. Whether or not there are any financial, political, or criminal repercussions to any of the extended Biden crime family, no one did any of this to the Bidens. No one “fucked” with a Biden.

They did all of it to themselves.

“Whether or not anything comes of this.”
I’ll believe it when I see it! These kind of scumbags seem to be untouchable. If not all the Clinton’s would be under the jail!

Everyone screws with Joe Biden. For fifty years he has been a political hack and a corrupt clown. This is common knowledge in the once-democratic party and the nation as a whole. My old college buddy Mo Zarif made great sport of screwing with Joe and John Kerry and is at this time orchestrating the next round of games from retirement as Joe begs the thugs in Teheran for a nuclear deal. Everybody screws with Joe Biden.

And now it’s We the Peoples turn.

If any charges are filed against scumbag crackhead Hunter it all needs to happen after the senial pile of shit is out of the oval office or he will just pardon the scumbag crackhead . They are both criminals and a disgrace to the United states of America.

“New Development in Biden Gun Case May Open Complaint for Reconsideration”
Yeah, and pigs may fly, too.

It took a “new development” to force the deepstate to face up to something
they already chose to ignore. Now they have to ignore it all over again, with help from a co-conspirator msm.

The ‘little man’ MUST “face the music” just as the government would HARRASS and ATTACK an American who does not have a “permanent practicing politician” as a “parent”! IE: quick-link, misspelled county of residence on a 4473, ETC.

Spelling is not one of a crackheads strong points . Roasting 8 balls of cola is thier forte .

So far this is a big ho-hum…..MSM has seen to the fact that Biden is president and the Biden justice Dept. has seen to it that he will never suffer any prosecution. Won’t happen until this administration is GONE!,and we might not even have a Republic by then.

When I see the name “Stambeoulieh” I am reminded Of
the Puppet Master in Pinocchio.