USA – -(AmmoLand.com)- You may not be a big fan of the ATF, and if so, I don’t blame you, but you would think that an agency that’s willing to scrutinize everything mom & pop gun shops do with respect to firearms would at least be following their own rules.

Some Background: As an additional arm to the ATF, the National Disposal Branch (NDB) was created to destroy on average, 23,000 guns confiscated or used as crime evidence every year in America. As we find out, the Attorney General implemented new requirements on the ATF and NDB with respect to its handling of the guns taken from the population and scheduled to be destroyed… because the department was literally being looted by its own employees. Firearms were being stolen from the facility due to the very sloppy procedures the ATF and NDB had in place for tracking the guns in their possession.

After auditing NDB surveillance camera footage, the Attorney General’s office found the following security failures. Staff was seen storing guns on top of vaults instead of inside them, they left keys lying around, exterior doors were propped open, people weren’t always signing in and out as required, and overall, there seemed to be a complete disregard for any sense of security measures. Some have argued that those who work for government may think they’re above the law. But that is not the worst of it.

Former NDB Security Guard Christopher Lee Yates decided he would use the stored firearms to create his own enterprise. Yates was convicted and sentenced to 14 years in jail for stealing firearms from the facility he worked for and reselling them. According to the complaint against Yates, the guns he stole from the facility were first falsely certified as destroyed.

Ironically, the ATF publishes a flyer on “Loss Prevention for Firearms Retailers” that warns firearms dealers on how to properly conduct their business to avoid things like, well…theft of firearms.

• Lock display cases at all times
• Show only one firearm at a time to a customer
• Secure firearms when the store is closed
• Use cable trigger guards
• Divide the firearms responsibilities (purchasing, Forms 4473, records)
• Require two-party inventories
• Ensure employees handling firearms are not prohibited. 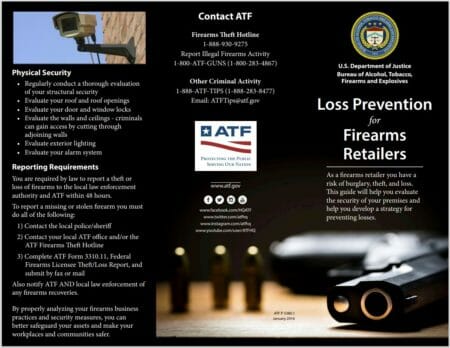 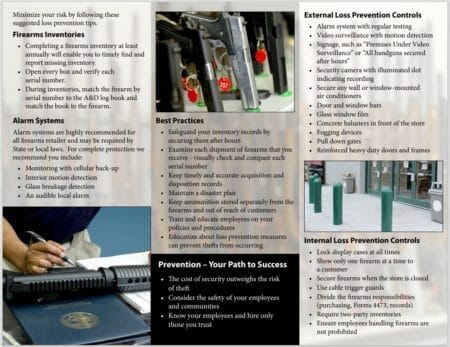 The ATF has revoked more FFL licenses in the year 2022 than in any year since 2006, yet it was their own sloppy handling of guns that led to theft, corruption, and those same guns ending back on the streets involved crimes.

At the same time the Biden DOJ is threatening firearms dealers with new stricter policies and pushing unconstitutional gun laws on American Citizens under the guise of, “public safety,” rogue ATF employees are profiting off guns confiscated from the public.

The White House said, “The Justice Department is announcing a new policy to underscore zero tolerance for willful violations of the law by federally licensed firearms dealers that put public safety at risk.” Well Joe, who exactly is putting the public at risk? Maybe you should get your own house in order before attacking others.

Dan Wos is a nationally recognized 2nd Amendment advocate, Host of The Loaded Mic and Author of the “GOOD GUN BAD GUY” book series. He speaks at events, is a contributing writer for many publications, and can be found on radio stations across the country. Dan has been a guest on the Sean Hannity Show, Real America’s Voice, and several others. Speaking on behalf of gun-rights, Dan exposes the strategies of the anti-gun crowd and explains their mission to disarm law-abiding American gun-owners.

I was just wondering if the clowns at the ATF have rounded up all the illegal guns that Barrack and Eric put on the streets ? Fast and furious appears to be a case of illegal gun running by Democrats . FJB and the ATF .

Do you really believe it ended there ? lol

This country will ALWAYS look weak until ALL of those responsible for the Gun-Walker scandal are prosecuted!

Alcohol Tobacco Firearms and Explosives should be a General Store, not an government agency!

I might shop there.
Apparently they have a lot of guns to sell.

Most of which are stolen……..

Yeah, I’d sure like to open one of those at MY place…….

How many illegal guns have been taken off the streets, and perps arrested by the ATF?
my guess is zero.

Last edited 1 month ago by Cruiser
8

They create their own perps by revising their rules.

As to “illegal guns taken off the streets” that MUST be zero because guns are not “legal” or “illegal” all on their own.
As to the number of perps arrested by BATF, that must be small. They seem to have a strong preference for those they entrap with false evidence or claims, and to go after non-perps (those who have caused no harm to anyone, nor would, but happen to runafoul of some niggly regulation they have imposed illegally (BATF canot MAKE LAW, not in their job description.That falls solely to the Congress)

But the judges and the courts coerce these defendants to waive rights and plead guilty because in most cases they have WEAL counsel and are threatened with longer sentences if they don’t cop to a lesser charge. Kangaroo Court 101

I can’t either. I can find ‘ON FBI WATCHLIST’, but not the other.

Not to mention the “scandal” when Al Gore received $350,000 from “Buddhist Monks” as a “campaign donation” while he delivered missile guidance technology to the Chinese. That issue disappeared as fast as Hunters deals.

Better yet:
That issue disappeared faster than an ounce of cocaine up hunters nose. Lol

Sadly, Mr. Yates malfeasance is almost comical when juxtaposed with the Clintons ‘selling’ missile guidance technology to the Chinese. https://apnews.com/article/2bd07ee4fca1ab8dd582acdc4c926c0e (note this is from a leftist source and consequently is somewhat whitewashed)

Maybe the Taliban placed an order for more weapons? EXCELLENT reporting Dan! We deeply appreciate you and the contributors to Ammoland. You guys are truly our number one source of REAL information!

Last edited 24 days ago by USMC0351Grunt
1
AmmolandTV
View All
Editor’s Pick
Recent Comments
wpDiscuz
We use cookies on our website to give you the most relevant experience by remembering your preferences and repeat visits. By clicking “Accept All”, you consent to the use of ALL the cookies. However, you may visit "Cookie Settings" to provide a controlled consent.
Cookie SettingsAccept All
Read More
Manage consent