USA – -(Ammoland.com)- “In response to your clients’ request dated June 30, 2016… under the Freedom of information Act …the Department has located 25 responsive documents,” a letter dated January 3, 2017 from the Department of State to attorney Stephen Stamboulieh began. “After reviewing these documents, we have determined that 15 may be released in full, 9 may be released in part, and 1 must be denied in full.”

Kent Terry, brother of slain Border Patrol Agent Brian Terry and I submitted a FOIA request seeking information on correspondence, documents and the like pertaining to Operation Fast and Furious and State Department interactions with the government of Mexico. There were multiple reasons for filing the request (see the filing by Stamboulieh Law, PLLC, for details), primarily because it explored an area that has been left largely unresolved by official inquiries from the House Committee on Oversight and Government Reform, the Senate Judiciary Committee, and the Department of Justice Office of Inspector General.

Because of State’s inaction on complying as required by law, we filed suit in August, 2017 “for injunctive and other appropriate relief and seeking the disclosure and release of agency records improperly withheld… “

But wait a minute—didn’t State respond? Why file a complaint if it looks like they did?

Their letter was actually written on January 3, 2018.  Here’s the cover email from State: 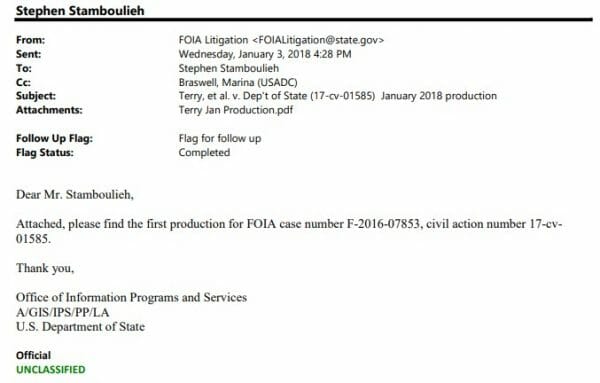 In any case, the information they released was hardly responsive. They included a page of exemptions under U.S. Code, page after page of essentially blank pages that tell us nothing, a letter from Senate Judiciary Committee Chairman Chuck Grassley to then-Secretary of State Hillary Clinton asking her to provide information on a Mexico trip headed by then-Assistant AG Lanny Breuer to discuss Project Gunrunner investigations (half a year prior to the Terry murder), more blank pages, another letter to Clinton from then-Chairman of the House Committee on Oversight and Government Reform, Darrell Issa, echoing Grassley’s request, and basically a bunch more useless and/or redacted pages, none of which addressed our FOIA request.

Still, attorney Stamboulieh was informed the January release was “first production,” and that further documents would be forwarded in early February.  And here they are.

The cover letter is dated February 2, 2017.  At least it acknowledges their previous “letter dated January 3, 2018.” As for responsiveness, here is a representative page: 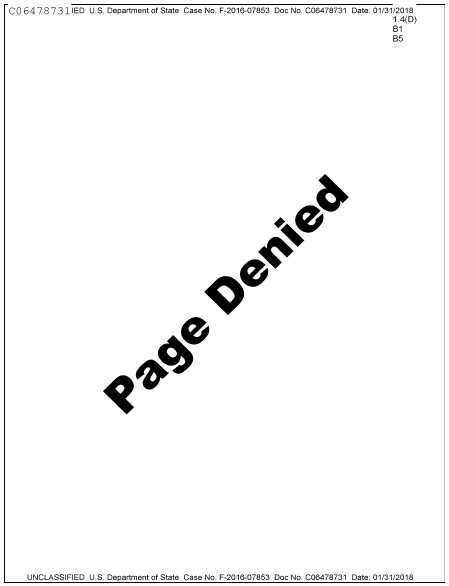 Why? What don’t they want to share, aside from everything? Scroll through the document and see for yourself how a clear and specific request has been dismissed.

The bottom line, as with another complaint of interest to this niche readership, all we want is what the public—and in this case, the Terry family — is entitled to know about government actions that have caused harm. We did not set out wanting to file a lawsuit. What we wanted were answers.

No one is doing this to have the court award monetary damages. We want the information we asked for. Because we’re forced to go to court, we want those doing the stonewalling to cover attorney expenses and reasonable litigation costs, leaving anything else – and there probably won’t be —  to the discretion of the judge.

We recently passed the seventh anniversary of the death of Brian Terry. The family has been left to wonder why no government actors have been held accountable and it looks like — despite plenty of self-serving noise — efforts in Congress appear to have stalled. Eric Holder is so unconcerned about his contempt charges going nowhere in court that he’s talking about running for president.

The Terry family appreciates that President Donald Trump has his hands busy these days, but ask your help in reminding him that he did promise:

“When I become president I will open the books on Fast and Furious and Brian. God bless your family Kent.’

In the absence of any signs of movement, President Trump should be reminded of that pledge. Fully determining what the Obama administration, Eric Holder’s Justice Department, and State under Hillary Clinton knew about Fast and Furious is clearly in his interests as well as the Terry family’s.

Why is the doj so afraid of the truth? What are they hiding? Why did obama and holder refuse to turn over requested documents? Why did obama stonewall and claim executive privilege?

“Somebody needs to go to prison” – National Treasure

What did anyone expect? They will cover up for the low life scum till the end. Tell you what…somebody should hook somebody up to an old crank telephone magneto and give it a few turns Bet they sing like canarys..

It stand to reason that if the dems would get off his back and quit being obstructionist some of these things could get done. Screwing around with a budget and shutdowns takes more time than the country can afford but leave it the dems to waste the time away then tell their constituents that they are fighting for them. Anyone in private business that acted the way dems act would have been fired a long time ago. We need more majority in the senate to get the job done.

The paper shuffle will continue no matter who ,
asks for it . The last admin. left land mines every where .
Step one wrong move boom ! start all over again due to ,
management changes of forms needed . You got the old,
one ! Then its the wrong area or office start over got somewhere else.
If the House can’t get stuff fast or at all ,why thing we can !

@Rich: You are correct but POTUS wields tremendous power in suggesting to either the House or Senate what he’d like to see when his party controls all three.

Everyone of the promises the president made, MUST go through the HOUSE and THE SENATE . The HOUSE is no problem . the SENATE is another thing. If it gets through both, the pres. Will sign it into LAW.

It appears that nothing has changed and that the FOIA still means absolutely nothing to the professional bureaucrats. The we versus them mentality is still alive and well in D.C. Everything changes yet remains the same. “We work for the government.” “We can do what ever we want and there’s nothing you can do about it.” “We don’t have to answer to the people.”
[W3]

Find out who made the decisions. Fire that person and everyone up the chain to the head bureaucrat, and then Trump will be the boss; the swamp will be a little more drained; and the Terry family will be one step closer to justice.

I agree, POTUS needs to be reminded of his pledge on this as well as National Reciprocity.

And the SHARE act, and Hearing Protection Act, and the many promises he made to the firearm owners of the nation.