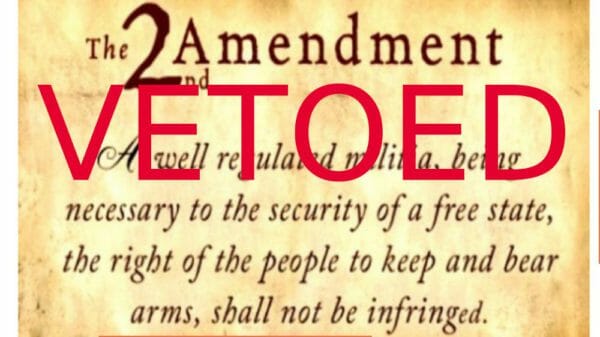 U.S.A. –-(AmmoLand.com)-— A governor’s veto of a Constitutional Carry bill is a setback for Second Amendment supporters and Constitutionalists.

A veto is also a signal the hard work of education has mostly been successful. How else would pro 2A bills reach anti-gun Governors’ desks?

During the last eleven years, there have been several governors who vetoed Constitutional Carry bills.

This correspondent found 14 vetoes of Constitutional Carry bills. Nine of the vetoes were by Democrats, five were by Republicans.

Sign up for the Daily Digest email and protect the 2nd Amendment.

West Virginia Democrat Governor Tomblin, vetoed Constitutional Carry in 2015, veto. He vetoed a similar bill in 2016, which the legislature overrode in 2016.

Governor Tomblin received the Constitutional carry bill on 26 February.  He waited to the last possible day to veto it, 3 March.

The House of Delegates overrode his veto on 4 March, and the Senate completed the override on 5 March, 2016.  From state.wv.us:

Democratic Gov. Maggie Hassan has vetoed a bill to remove the licensing requirement for carrying concealed guns as expected.

Hassan vetoed a similar bill last year, but Republicans have once again sent the measure to her desk. Hassan is facing off against Republican U.S. Sen. Kelly Ayotte in one of the country’s most competitive Senate contests.

When a Constitutional Carry bill is vetoed, it shows a majority of the legislature and leadership has been willing to go on record to support the bill. They believe support will gain them more votes than they will lose. Even if they do not wish the bill to pass, this dynamic makes it very hard for them to resist passing the bill as they go forward. It is worthwhile to push for the restoration of Second Amendment rights, even if the bill will be vetoed.

Both Pennsylvania and Louisiana are likely to pass Constitutional Carry bills in the next two years.  It will depend on what happens with the governors in those two states.

If for nothing else, the wave of states enacting Constitutional Carry seems to demonstrate that the core of America supports civilian gun rights, despite herculean efforts by antis and their billionaire bankrollers. But for those residing in the highly restricted states, Constitutional Carry most likely will never occur (at least not from within the states). For them just enacting “shall issue” would be a satisfactory benchmark for gun rights. If shall issue becomes attainable,through a favorable ruling from SCOTUS, then some time afterwards would be an appropriate time for lobbying for Constitutional Carry for other states.

If possible, this needs to be put on the ballot so the citizens can decide.

That might be a possibility. It is against the law to vote our 2nd amendment rights away yet kommiefornia and Washington has already done it. Oregoneistan is going to do the same thing this year with measures they have on the ballot. If they can vote to take them away, why can’t we vote to strengthen them.

You could be right. It seems that the democraps are doing everything they can to destroy the real America and make a new Marxist NWO that our President has already said is coming and we cant stop it. I think they want us to do it so they can claim that we are the terrorists against the government and use the military or the UN to start their cleanse of constitutionalists and start filling their concentration reprogramming camps or death pits and trenches. Sounds gruesome and unrealistic but after these last 10 years I wouldn’t put anything past our government… Read more »

I kind of feal that coming, a precinct with more ballots cast than there are voters (Arizona had two that way) and a federal judge saying you cant audit to find problem (sound familiar?)

No, this issue will not depend on a popular vote at all. What may well happen is that in any given state or county, enough folks will simply decide the risks taken by (illegally) carrying a concealed handgun upon their persons is far less than the risk they take by NOT being armed as tney go about their daily business. I have carried for fifteen years in my state (full sized pistol, concealed) and been “made” only twice, both times by private citizens who noticed when my shrttail rose up and sidled up to me and quietly said “better no… Read more »

We have been on the receiving end of those gun grabbing SOB’s bullshit for many years. Do you think the candy assed cowards might get their feelings hurt by some tough talk ? Maybe truthful tough talk is what we should had been doing for many years. I think Boz could very well be right !

Democrats who get elected always follow party guidelines until they become challenged in upcoming elections. Then they lie like a old rug worn out ready for the trash.

Well, at least some states have the ability to overcome vetos. Here in the socialist state of California, democrats have veto proof communist rule.

Thank deluge “cheap labor” immigration, invasion-occupation, anchor-Democrat fast-breeding, term limits since 1990, and NRA grifters sucking $Billions out of the state that should’ve been used to prevent it.

time to pull the chain and flush the bowl. But not enough Californains have experienced a high enough evel of pain to rise up and do so. The stench must get much worse before “intolerance” is reached. How much jope doo I have this will happen wihtin my lfietime? I’ve got NO plans to ever return to that hole of a state to live there again, and only very rarely, dragged kicking and screaming all the way over the Siskiyu passes, to even visit.

Republicans in California must first find sane candidates. They won’t be found on boards like this.